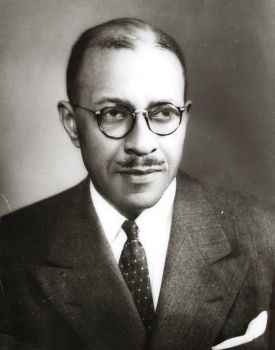 Charles Spurgeon Johnson, one of the leading 20th century black sociologists, was born in Bristol, Virginia on July 24, 1893. After receiving his B.A. from Virginia Union University in Richmond, he studied sociology with the noted sociologist Robert E. Park at the University of Chicago, Illinois, where he earned a Ph.D. in 1917.  Initially a friend of historian Carter G. Woodson, he did collaborative work with the Association for the Study of Negro Life and History until his relationship with Woodson deteriorated.

Johnson was able to attract research funding from white philanthropic organizations such as the General Education Board, Phelps-Stokes Fund, Rosenwald Fund, and the Rockefeller Foundation, which allowed him to study the social condition of Black communities suffering under Jim Crow.  By the 1920s, Johnson emerged as the nation’s foremost scholar in the field of Black Sociology.

Surviving and being a witness to the race riots during the Red Summer of 1919, Johnson investigated the causes of the riots and produced an assessment for the Chicago Commission on Race Relations.  His research ultimately became The Negro in Chicago, the first of numerous published 20th century studies of the causes urban riots and their consequences.   This highly acclaimed study led to Dr. Johnson being appointed director of research for the National Urban League in 1921.  In 1923, Johnson founded its professional magazine, Opportunity, and became its first editor.  Opportunity published a wide variety of social science research and popular essays which revealed the impact Jim Crow on African American communities.

In 1928, Dr. Johnson moved to Fisk University to continue his research and to become the first chairman of its newly established Department of Social Sciences.  He viewed the move to a black institution as strengthening his scholarly work by enabling him to acquire more white philanthropic research funding. Upon receiving the funding he expected, Johnson established the Fisk Institute of Race Relations, the first “think tank” at a predominantly black institution.  He also continued to publish sociological studies, including Shadow of the Plantation (1934) and Growing up in the Black Belt (1940). In 1946, in recognition of his scholarly efforts, the board of trustees appointed him the first black president of Fisk University. He served in this capacity until his death.

Dr. Johnson was a member of Alpha Phi Alpha and Sigma Pi Phi fraternities. He died of a heart attack in Louisville, Kentucky on October 27, 1956.  He was 63 years old.