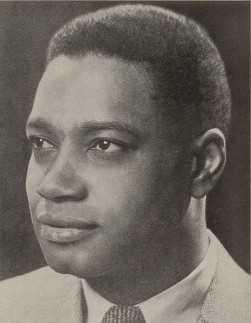 Compared at the time to his more famous colleague, Paul Robeson, and heralded by major publicity outlets of his day as one of black America’s most exceptional baritone vocalists, singer-actor Kenneth Spencer was one of the most prominent black artists of the early 20th Century. Spencer was born in Los Angeles, California in 1913. He studied at the Eastman School of Music in Rochester, New York where he earned a bachelor’s degree in music in 1938.

Early in his career, Spencer performed as a baritone singer on a variety of network radio stations while working odd jobs to supplement his income. Determined to advance his career, Spencer traveled and performed with the St. Louis Opera Company and the New York Philharmonic Orchestra. Eventually he became a soloist with the Los Angeles Philharmonic Orchestra.

In the late 1930s Spencer expanded his career into acting. That career reached its peak in 1943 when he received critical acclaim for his screen debut in the war film Bataan.  Spencer’s character, Wesley Epps, was depicted as a dignified man with immense military skill who was called to action. The same year, he portrayed the dual role of the Reverend Green and the celestial general in one of the first all-black-cast, big-budget films – Cabin in the Sky opposite Eddie “Rochester’ Anderson and Rex Ingram. He also delved into theatrical acting, appearing in Langston Hughes’s 1943 play For This We Fight, which starred Paul Robeson and Canada Lee. Yet, such distinguished roles remained scarce for talented African American actors like Spencer in the 1940s, regardless of their portfolios.

Seeking greater opportunities to place his talents, Spencer in the early 1950s relocated to Europe where he appeared in a number of successful films over a decade-long period.  He also continued to perform in London and Paris as a vocalist.

On February 28, 1964, Kenneth Spencer died in a plane crash while he was en route to New Orleans for a homecoming performance in that city.