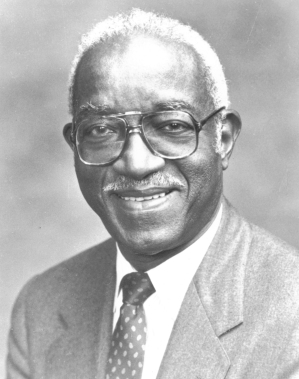 John Hope Franklin, one of the nation’s leading historians, is the only African American who has served as president of both the American Historical Association (AHA) and the Organization of American Historians (OAH).

Franklin was born in Rentiesville, Oklahoma on January 2, 1915 to parents Buck, a Tulsa attorney, and Mollie Franklin. He recalled growing up in Tulsa, in a Jim Crow society that stifled his senses and damaged his “emotional health and social well being.” While his family was in Rentiesville, Buck Franklin not only survived the June 1921 Tulsa Race Riot, but also successfully sued the city. This suit, before the Oklahoma Supreme Court, overturned a Tulsa ordinance which prevented the city’s blacks from rebuilding their destroyed community.

Franklin attended Fisk University in Nashville, Tennessee, graduating magna cum laude in 1935. He received his M.A. in history from Harvard in 1936, taught at Fisk University and returned to Harvard to complete the Ph.D. in history in 1941. While matriculating at Harvard, he took on a teaching position at St. Augustine’s College, a predominantly black college, in Raleigh, North Carolina. This position enabled him to complete his research for his dissertation which was published in 1943 as The Free Negro in North Carolina, 1790-1860. This book established his importance to southern history and he was subsequently invited, in 1949, to present a paper at the Southern Historical Association which broke the color line for that association. In 1956, Franklin became the first black person hired as chairman of a history department. That position at Brooklyn College led, in 1964, to an endowed chair at the University of Chicago (Illinois) in 1967 where he also served as department chair until 1970. Franklin remained on the University of Chicago until 1982 when he accepted the James B. Duke Professorship at Duke University.

John Hope Franklin’s most important work was the 1947 publication of From Slavery to Freedom: A History of Negro Americans which has become the longest, continuously published survey text used in American history courses. Franklin has published a number of other books including The Militant South (1956); Reconstruction After the Civil War (1961); Color and Race (1968); A Southern Odyssey: Travelers in the Antebellum North (1975); and George Washington Williams: A Biography (1985).

In 1979 President Jimmy Carter appointed Franking to the Advisory Commission on Public Diplomacy and in 1980 he was a United States delegate to the 21st General Conference of UNESCO. He has also taught in England, Australia, and the People’s Republic of China. He serves on the advisory board and is the former chair of One America: The President’s Initiative on Race created by President Bill Clinton in 1997.

John Hope Franklin, a member of Alpha Phi Alpha and Sigma Pi Phi fraternities, died in Durham, North Carolina on March 25, 2009 at the age of 94.