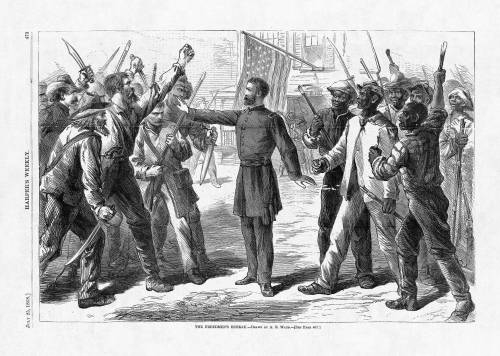 The Bureau of Refugees, Freedmen, and Abandoned Lands, commonly referred to as the Freedmen’s Bureau, was created by Congress on March 3, 1865.  Fashioned to provide temporary, one-year assistance to former slaves and destitute whites in the war-ravaged South, in July of the following year Congress prolonged its life over President Johnson’s veto.

During the Civil War, northern abolitionists immediately recognized the dire condition of formerly enslaved people who had fled to Union lines.  Consequently, aid societies sprang up throughout the country to assist them.  Under extreme pressure from such groups, as early as 1861 President Abraham Lincoln gave military commanders the authority to administer aid for their immediate needs.

This early action led to the quick realization by President Lincoln of the need for a larger and more efficient federal bureau to oversee the distribution of aid.  Established within the Department of War with Major General Oliver Howard as Commissioner, the Freedmen’s Bureau provided food and medical care for the freedmen, established hospitals, and offered legal services.  Land management, however, was the central concern of the Bureau, and upon its creation it immediately began intense negotiations with other federal agencies in the hope of settling the freedmen on ex-Confederate lands.

After lengthy deliberation, Congress determined that no ex-Confederate land would be given to the freedmen.  However, the Freedmen’s Bureau was invested authority over all abandoned and confiscated lands, where a marginal sell-price was fixed to encourage land ownership among the freedmen.  As a result, tens of thousands of African Americans experienced land ownership for the first time.

When former slaveholders recovered their land upon President Andrew Johnson’s amnesty proclamation of May 29, 1865, many freedmen were expelled from land they had paid for.  Changing its strategy, the Freedmen’s Bureau then encouraged the freedmen to seek employment with former slaveholders.  Many became tenant farmers.  Others ended up renting from their former masters who took advantage of them, often denying them of their earnings.

The Freedmen’s Bureau, although a short-lived entity, did provide opportunity for African Americans by way of land ownership.  Furthermore, during its later years of existence the Freedmen’s Bureau established over 1,000 schools and several black colleges – by far the most lasting of its legacies.  However, many of the earlier achievements regarding land redistribution were quickly overturned concomitant with President Johnson’s amnesty proclamation to former slaveholders.

Throughout its entire existence, the Freedmen’s Bureau held less than two-tenths of one percent of all southern lands, most of which President Johnson’s amnesty proclamation restored to former slaveholders.