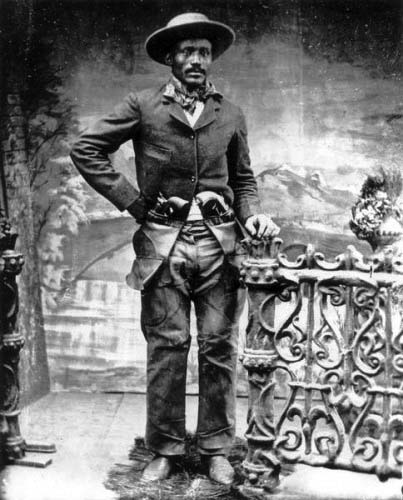 Isom Dart, born enslaved in Arkansas in 1849, and originally known as Ned Huddleston, gained a reputation as a late 19th Century Wyoming Territory outlaw. He had many aliases including “Black Fox,” “Tan Mex,” and “Calico Cowboy”.

At the age of twelve Huddleston accompanied his owner, a Confederate soldier, to Texas where he helped steal food and supplies for the troops during the Civil War. Returning to Arkansas at the end of the war, Huddleston was freed and drifted throughout the west.

En route to Texas, Huddleston stopped to work as a camp cook at the Carmicle railroad in Wyoming Territory near Rock Springs, Wyoming. It was a coal mining and railroad town known for its diversity, saloons, and outlaws. Reflective of the racial prejudice of the times, the camp nicknamed him “Nigger Ned.” He would soon earn a new nickname, “Quick Shot,” after firing his six-shooter leaving five headless sage chickens in a Green River, Wyoming meadow. The unbelievable feat would be one of many tales to follow the Wyoming desperado.

Watching the trappers, hunters, and traders come and go through the camp prompted Huddleston to move on as well. He drifted as far as the Texas-Mexico border where he worked as a rodeo clown and stunt rider. However, he also tried his hand as a horse thief and cattle rustler which was more profitable than his previous occupations. He stole horses and cattle in Mexico, brought them across the Rio Grande, and sold them in Texas.

Growing tired of the outlaw life around 1875, Huddleston moved to northwest Colorado, bought a ranch near Brown’s Hole (also known as Brown’s Park), changed his name to Isom Dart, and had a love affair with a Shoshone woman. Dart found success as a rancher and bronco buster, but before long, the wild life pulled him back in with gambling, fights, and encounters with the law. He joined the Tip Gualt Gang of outlaws and returned to cattle rustling.

By 1899, the Brown’s Park range war was in full swing with the Two-Bar Ranch Cattle Company and the Snake River Stock Growers Association attempting to push out small ranchers. Dart joined Ann Bassett, otherwise known as “Queen Ann,” who ran the Bassett Ranch while operating as a cattle rustler in the area. She and Dart stole cattle from the Two-Bar Company.

Fed up with their rustling activities, the company hired notorious range detective Tom Horn in hopes of driving small ranchers from their lands. Dart received a notice ordering him to leave the Brown’s area. Other small ranchers received the same threatening notice and many of them left. Dart however refused to leave his home in nearby Routt County, Colorado. On the morning of October 3, 1900, Dart walked out his cabin door and Horn shot him dead. Isom Dart, 51 at the time of his death, was buried in Maybell, Moffat County, Colorado in an isolated gravesite near North Highway 72.