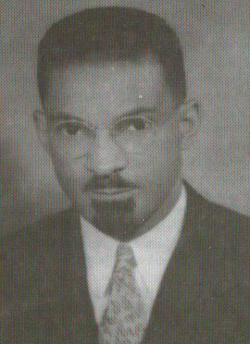 African American philosopher Charles Leander Hill was born on July 28 1906 in Urbana Ohio. Hill was one of seven children born to David Leander and Karen (Andrews) Hill. Well respected in the Urbana community, the family lived on a street which was named after them. Hill’s father was the first African American police officer in Urbana. His mother was a homemaker, active in various civic and church organizations, and also a devout member of the St. Paul A.M.E. Church. St. Paul was founded in 1824 and served as a pivotal institution in the African American community. For the young Hill, St. Paul A.M.E. was a second home, the edifice of his spiritual family, and as a child he yearned to be a minister.

Hill entered Wittenberg University in 1924 and graduated magna cum laude four years later. A prodigious worker, Hill also became a deacon in the A.M.E. Church in the same year as his graduation. Hill then attended Hamma Divinity School and acquired the Bachelor of Divinity in 1931. Hill was the consummate student at Hamma for in addition to his curriculum of church history, theology, philosophy and homiletics, he acquired mastery of several languages including Hebrew, both ancient and modern Greek, Latin, German, Spanish, French and even Sanskrit. Before completing his seminary education toward the B.D., Hill became an ordained elder of the A.M.E. Church in 1930. It was in the following year that he earned a fellowship for graduate study at the University of Berlin, which included research on Philip Melanchthon (German co-reformer of the Protestant Reformation with Martin Luther). Apart from Hill’s doctoral research on Melanchthon, one of Hill’s most significant discoveries was in finding the Ghanaian philosopher Anthony William Amo’s inaugural dissertation on apathy. The first person of African descent to receive a doctorate in philosophy, Amo taught philosophy at several leading German universities in the 18th century. Charles Leander Hill’s discovery of Amo’s text remains as a monumental achievement in Africana philosophy. Hill was the first person to translate Amo’s work from Latin into English; he additionally provided the first commentary on the philosophical substance of Amo’s thesis. Hill decided to submit his translation and commentary as an article entitled, “William Ladd, The Black Philosopher from Guinea: A Critical Analysis of His Dissertation on Apathy” to The A.M.E. Review and it subsequently appeared in the October/December issue of 1955.

After his return from Germany, Hill continued with his graduate education at Hamma and earned the Masters of Sacred Theology in 1933. In the same year, Hill started his academic career as Dean of the Turner Theological Seminary at Morris Brown College. There Hill began to polish his skills as an administrator in higher education. Nevertheless, Hill still desired to advance his formal education. His scholarly concerns about Melanchthon coincided with his eye for improving his position as an educator in higher education. Therefore Hill took a leave of absence in 1936 and returned to Ohio to complete a doctorate in philosophy. At Ohio State University, Hill persisted with his research on Melanchthon, and remarkably he completed all requirements for the Ph.D. within the span of just two years. Thus he became only the second African American to earn the Ph.D. in philosophy from that institution. Hill followed Marquis Lafayette Harris who achieved the honor in 1933.

In 1947, Hill was inaugurated as Wilberforce University’s thirteenth president. Along with functioning at the helm at Wilberforce, Hill took on the responsibility of teaching classes in philosophy. In fact, unable to find a suitable text for classroom instruction, Hill wrote a history of modern Western philosophy that was published in 1951. With A Short History of Modern Philosophy from the Renaissance to Hegel, Hill became the first African American philosopher to publish a book on the history of modern philosophy. Unfortunately Hill’s brilliant career as an educator and philosopher came to a sudden end. On December 8, 1956, Hill died after a stroke at the relatively early age of 50 years old.