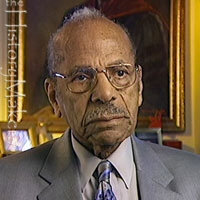 African American philosopher Richard I. McKinney was born on August 8, 1906 in Live Oak, Florida on the college campus of Farmer Institute (later named Florida Memorial College). The son of educators, he graduated from Morehouse College in 1931 with a major in philosophy and religion. Following his graduation from Morehouse, McKinney enrolled at Newton Theological Seminary and he completed his Bachelor of Divinity degree in 1934 with a thesis entitled, “The Problem of Evil and its Relation to the Ministry to an Under-privileged Minority.” In 1937, he also earned the Masters of Sacred Theology degree at Newton.

McKinney obtained his Ph.D. from Yale in 1942 with a doctoral dissertation on “Religion in Higher Education among Negroes.” After Yale, McKinney conducted post-doctoral work at the University of Chicago, Columbia University, and the Sorbonne in Paris. McKinney’s first academic appointment was at Virginia Union; he was an assistant professor and Director of religious activities. He later assumed the post of Dean of the School of Religion.

McKinney left Virginia Union in 1944 and became president of Storer College in West Virginia. Storer College was the first institution established as a teacher’s college for African Americans in the state of West Virginia. When McKinney departed from Storer in 1950, he headed for Morgan State where, starting in 1951, he spent the majority of his academic career. McKinney became the Chair of the Department of Philosophy and the Division of the Humanities and ultimately served as acting dean of the College of Arts and Sciences before his retirement in 1978. After his retirement from Morgan State, he assumed another administrative post as acting Vice President for academic affairs at Virginia Union. McKinney then returned to Morgan and taught philosophy there well into his 90s.

Richard I. McKinney, a member of Sigma Pi Phi Fraternity, died in Baltimore, Maryland on October 28, 2005, at the age of 99.