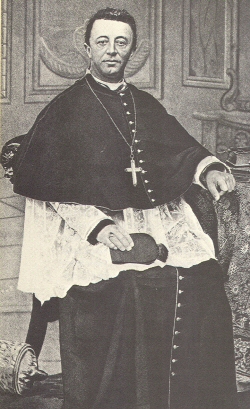 James Augustine Healy was the first born of ten children to Michael and Mary Eliza Healy on April 6, 1830 on a cotton plantation in Georgia. Michael Healy was a former Irish soldier who immigrated to America. He became a planter after the war of 1812. In 1829 he fell in love with Mary Eliza, a mixed-race domestic slave, whom he purchased from her former owner. At that time Georgia law prohibited interracial marriage, but both decided that they would base their marriage on love and not the law, to create a family of their own.

However, James and his siblings were still considered illegitimate and slaves at birth under Georgia law. These laws banned them from attending school within the state, so to receive an education James’s parents sent their children to Quaker schools in the north in the 1840s.

In 1844, James Healy was sent to grammar, secondary and collegiate schools at the new Holy Cross College in Worcester, Massachusetts. James graduated as valedictorian in the first graduating class of 1849. Two years later he earned a master’s degree. It was at Holy Cross where James decided to enter the priesthood. He enrolled in the Sulpician Seminary in Paris, France and in 1854 was ordained at Notre Dame Cathedral in Paris, thus becoming the first African American to be ordained a Roman Catholic priest. On his return to the United States, James began his ministry as assistant priest with the diocese of Boston where he served for the next 21 years.

In 1875, Pope Pius IX named James Bishop of Portland, Maine. In the following 25 years, under his administration, 60 churches, 18 schools and numerous convents and welfare institutions were established. Membership in the Catholic Church in his jurisdiction doubled to about 100,000. James Healy would also manage the diocese of Maine and New Hampshire.

Bishop Healy took a leadership role in the American Catholic hierarchy. He proposed three major pieces of church legislation that passed the Third Council of Baltimore. Bishop Healy also served on the commission that established the Catholic University of America in Washington, D.C., and he was a member of the Council’s commission for Negro and Indian mission. Despite his church responsibilities Bishop Healy also found time to lobby on social issues such as Indian rights and child labor laws.

On April 5, 1900, Bishop James A. Healy died of a heart attack in Portland, Maine. Over 200 priests, seven bishops, many judges, state legislators and several community leaders attended his funeral. Bishop Healy, as he wished, was buried in a simple graveyard rather than in the Portland Cathedral’s vault. Holy Cross College, where his calling for priesthood was rooted, named a building in his honor.