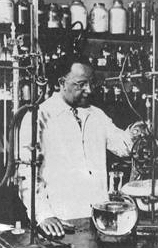 A native of Montgomery, Alabama and grandson of slaves, Percy Lavon Julian, born April 11, 1899, was a trailblazer in the chemical sciences. His parents Elizabeth Lena Adams, a school teacher, and James Sumner Julian, a railroad mail clerk who loved mathematics, raised six children, all of whom pursued a college education. Two sons became physicians, and three daughters received M.A. degrees.

After attending public school in Montgomery, Julian moved to Greencastle, Indiana in 1916 to enroll at DePauw University. While at DePauw he was named a member of the Sigma Xi honorary society and Phi Beta Kappa. In order to finance his college education, he worked as a waiter and a ditch digger. Julian was selected as the class valedictorian upon his graduation in 1920.  After completing his undergraduate degree, Julian was determined to earn a doctorate in chemistry despite the racism which prevented African Americans from pursuing graduate degrees in all but a handful of universities.

Between 1920 and 1922, Percy Julian taught chemistry at Fisk University while earning an M.A. from Harvard University which he received in 1923. From 1926 to 1927, he taught chemistry at West Virginia State College, and he became the chair of the chemistry department at Howard University in 1928. In 1929, Julian was awarded a fellowship from the Rockefeller Foundation that allowed him to finally pursue his doctorate. Julian left the United States to study at the University of Vienna (Austria), where he earned his Ph.D. in 1931.

Julian briefly returned to the chemistry department at Howard University, but by 1933, he was a research fellow at DePauw University, where he published several peer-reviewed articles in the Journal of the American Chemical Society.  In 1936, Julian left DePauw and became the Director of Research of the Soya Products Division at Glidden (Chicago, Illinois), where he was the first black scientist hired by the firm. While a chemist at Glidden, he developed an inexpensive process to prepare cortisone, which is used in the treatment of arthritis.  He also developed a flame retardant used by the U.S. Navy in World War II which saved the lives of a number of sailors.

In 1953, Percy Julian established the Julian Laboratories, which produced steroid-containing compounds. He subsequently hired many African American scientists who shared his interest in a career in the scientific field.  In 1961, he sold Julian Laboratories for two million dollars.

Over the course of his career, Dr. Percy Julian had over 100 peer-reviewed publications and 115 research patents. In 1973, he was elected into the National Academy of Sciences. Julian was also a member of Sigma Pi Phi fraternity. Percy Julian died of liver cancer at his home in Waukegan, Illinois on April 19, 1975.  He was 76.