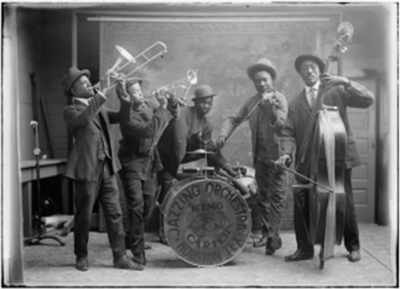 In the following article historians Bruce Glasrud and Cary Wintz discuss their new book, The Harlem Renaissance in the American West which argues that the literary and artistic outpouring by African Americans during the third decade of the 20th Century was a national phenomenon which included the American West.

During the 1990s, Bruce Glasrud spent considerable time, together with co-editor Laurie Champion seeking African American fiction set in the West. They discovered a remarkable trove of short stories that were published in 2000 as The African American West: A Century of Short Stories. In the process, Glasrud noticed that a number of prominent (or sometimes forgotten) black authors who wrote stories connected to themes, time, and spirit of the Harlem Renaissance. He began to suggest that there was a Harlem Renaissance in the West. Concurrently, Harlem Renaissance scholar Cary D. Wintz began arguing that the understanding of the Harlem Renaissance could greatly be energized and understood by examining other cities such as Chicago, Philadelphia, Boston, and Washington D.C. where this emerging cultural activity took place, and by examining music, the visual arts and other creative forms beyond literature. At one conference where Glasrud discussed the Renaissance in the West, Wintz agreed that it might be significant, and said to Glasrud: “let’s do something about it.” We decided to do just that.

We also agreed that we would need a decade to do all the original research and writing to complete such a book ourselves. We decided instead to contact scholars in the field of the black west and solicit their advice and hopefully their scholarship. We succeeded, and convinced thirteen authors to write chapters on the Harlem Renaissance in urban centers in the American West. We wrote the Introduction as well as the chapter on “The Black Renaissance in the Desert Southwest.” In it we pointed out the significance of the first black woman novelist, Lillian Jones Horace, and Anita Scott Coleman, who from her home in Silver City, New Mexico (and later Los Angeles) published at least thirty short stories.

The study, The Harlem Renaissance in the American West, shifted the focus of the Harlem Renaissance away from New York City’s Harlem to the cities and states of the American West, and away from literature to the full range of the creative arts. It is inspired by the broadened view of the early twentieth century African American literary and artistic movement that has established that while the Renaissance was centered in New York, it was a national phenomenon. The traditional view held that while few of the participants in the Harlem Renaissance were from Harlem, all spent considerable time there.  We determined that while most of the writers and artists associated with the movement spent significant time in Harlem, and most considered themselves part of the Renaissance, many also spent long periods of their careers away from Harlem, and some spent most or all of their creative careers outside of New York. The black experience in the West clearly establishes that not only did many participants in the Harlem Renaissance have western roots or western connections but in communities across the West African Americans were involved in black art, literature, and music both as consumers and as artists themselves. In her 2008 book, From Greenwich Village to Taos: Primitivism and Place at Mabel Dodge Luhan’s, Flannery Burke observed that the term Harlem Renaissance “is a misnomer that fails to acknowledge the cultural activities of African Americans prior to the 1920s and in areas outside New York City.” Our volume pursues Burke’s comment by investigating the West.

Given the relatively small African American population in the West, a disproportionate number of black writers and artists had roots in the West before they came to Harlem. The best known of these is Langston Hughes. Not only did Hughes spend most of his childhood in Lawrence, Kansas, but he celebrated his western roots in his writing. The title poem of his first book of poetry, “The Weary Blues,” was inspired in large part by a street-corner musician he encountered during a childhood visit to Kansas City. His first and most important novel, Not Without Laughter, was set in a fictionalized Lawrence, Kansas, and addressed the issue of migration to the urban north, and the way that the arts provided an escape from poverty for talented African Americans. Aaron Douglas, who became a friend of Hughes in Harlem, grew up twenty-five miles west of Hughes in Topeka, Kansas although they did not know each other. Douglas studied art at the University of Nebraska and then taught art in Kansas City before moving to Harlem in 1924. Two other close friends of Hughes met in Los Angeles before they moved to Harlem. Arna Bontemps was born in Louisiana, but spent his childhood and early adult years in Los Angeles; Wallace Thurman grew up in Salt Lake City, but moved to Los Angeles to attend college. Both moved to Harlem in 1924, and both set at least parts of their novels in the West.

Other African Americans, born elsewhere, established their careers in West. Many black musicians performed in western cities, but at least three had deeper ties there. Jelly Roll Morton, one of the founding fathers of American jazz, spent the six years from 1917 to 1923 based in Los Angeles. Louis Armstrong left Harlem and the famed Connie’s Inn to become the orchestra leader at the Cotton Club in Los Angeles. Armstrong returned to Hollywood frequently during his career to appear in films. Between 1932 when he made his film debut through 1945 he participated as actor or musician in sixteen Hollywood films. Black filmmaker, Oscar Micheaux, left his native Illinois to become a homesteader in South Dakota in 1905. Micheaux’s career as a sodbuster lasted only about five years, but it gave him material for two novels and one motion picture.

The experiences of individual writers and artists indicate clearly that the Harlem Renaissance extended into the West. This study, however, focuses on the western cities and states, not individual artists, and its purpose is to capture the African American cultural and artistic creativity in black communities in this region of the country. In Texas, for example, the urban centers of Dallas, Fort Worth, Houston and San Antonio vibrated with cultural energy. They were not alone: El Paso poet Bernice Love Wiggins published a volume of poetry in 1925. The Alain Locke of Texas, famed folklorist J.  Mason Brewer, published a volume of black Texas poetry, Heralding Dawn, while teaching at Huston-Tillotson College (now university) in Austin, Texas. From his base in Marshall, Texas, the home of two African American colleges, Wiley and Bishop, Harlem Renaissance poet Melvin Tolson invited lecturers such as Langston Hughes to campus.

The Renaissance came to other Great Plains states, Black communities in Oklahoma City and Tulsa heralded this new period of artistic energy. Author Ralph Ellison grew up playing in a jazz band there in Oklahoma City and as we noted, Kansas produced writers and artists who ultimately left the state to become key persons in the Harlem Renaissance. Wichita, Lawrence, Topeka, and Kansas City fostered their own black renaissance. Omaha, with a large, vibrant black population, and Lincoln became centers of the artistic, musical, and literary contributions. Black students at the University of Nebraska, as well as those at Kansas, Iowa, and Minnesota, made their own special contributions. In Minnesota, Minneapolis developed its own musical sound.

The movement stretched farther west. Denver, Helena, and Laramie featured black bands and other artistic developments. In the southwest, Jean Toomer spent considerable time in Taos while short story writer and poet Anita Scott Coleman, from Silver City, New Mexico, eventually published over thirty short stories in leading periodicals of the day. Black Albuquerque published two newspapers which featured renaissance writings while Tucson and Phoenix became renaissance hubs in Arizona. Three California cities became prominent parts of the “New Negro” movement of the 1920s and 1930s: San Diego, Los Angeles, and San Francisco/Oakland. These cities loomed large in the western renaissance as black authors and entertainers frequently worked there. Short-lived magazines such as Ink Slinger and Flash tried to establish a place West Coast place for artistic endeavors. San Diego, a vital center for the emergence of California Soul, African American music in California that was urban, diverse, and multiethnic, attracted prominent musicians. San Francisco and Oakland also witnessed and participated in renaissance activities. Horace Cayton, Sr. and his family as well as other artists and writers brought the renaissance to the Pacific Northwest cities of Portland and Seattle.

The fourteen essays of The Harlem Renaissance in the American West reflect the scope and diversity of the African American cultural experience in the western half of the United States. The first five essays explore the Harlem Renaissance in five major western cities: Houston, Dallas, Kansas City, Los Angeles, and the San Francisco Bay area. The first four had the largest urban African American populations during the period of the Harlem Renaissance in the West, while the Bay Area, with a smaller black population, had a particularly vibrant artistic community. The next nine chapters move geographically across the region as they explore black culture in the west. Beginning in Oklahoma with its large African American population, we continue north, first to Nebraska and then to the Twin Cities. The four chapters that follow begin in the southwest, first with the San Antonio/Austin area, which had a smaller African American population and demographics more akin to Albuquerque than to the other Texas cities, then west to New Mexico and Arizona, then north to the Denver area, and further north to Montana and Wyoming. The final two chapters move down the Pacific Coast, from Seattle and Portland in the Pacific Northwest to San Diego at the Mexican border.

Each essay is unique, but each explores the Harlem Renaissance in the West from one or more of the following perspectives. First and most important is the African American creative arts within the community and its surrounding area, including those artists who remained in the community as well as those who moved on to Harlem, Chicago, or other centers of African American literary and artistic creativity.

Second is the question of how the larger Harlem Renaissance impacted local African American communities. This included visits, performances, or exhibits by Harlem Renaissance figures as well as book clubs, reviews, news reporting, media events, educational activities, the impact of black cultural magazines such as The Crisis and Opportunity, and other ways that the community interrelated with the Harlem Renaissance.

Third is the process through which blacks in western urban centers reflected or absorbed the themes and ideas associated with the Harlem Renaissance/New Negro movement in terms of culture and the creative arts among African Americans, the impact of the black artists and/or performers who visited those cities, and the broader political and racial developments that were a part of that time period. The final perspective is the degree to which the larger white community responded to or interacted with the developments of African American literature, visual arts, theater, and especially music. When future generations examine this cultural outpouring of the 1920s and 1930s they will conclude that “Harlem” was the descriptive name applied to a process that included the entire American nation.