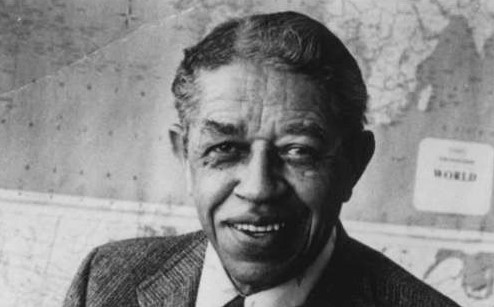 Malvin Russell Goode was the first African American news correspondent for a major television network. Goode was born on February 13, 1908, in White Plains, Virginia, but his family moved to Homestead, Pennsylvania, near Pittsburgh, when he was very young. Goode, the third of four boys and two girls, attended public school in Homestead, Pennsylvania. While still in high school, Goode began working nights at U.S. Steel’s Homestead Mill where his father was employed, and continued his employment there even as he attended the University of Pittsburgh. He received a bachelor’s degree there in 1931. After graduation, he continued to work at the mill because jobs were difficult to find during the Great Depression.

In 1936 Goode finally left the Homestead Mill to become a probation officer for Pittsburgh’s juvenile court. He also worked at Pittsburgh’s Young Men’s Christian Association (YMCA). In 1942 he became the manager of the Pittsburgh Housing Authority, remaining at that post for six years.

In 1948 Goode, at the age of forty, became a journalist when he was offered a job as a reporter for the Pittsburgh Courier, one of the two largest black newspapers in the United States. He became a radio broadcaster in 1949, working for Pittsburgh’s AM radio station KQV, doing fifteen-minute news shows. Goode also worked for WHOD television station where he anchored a five-minute daily news show. He was named the station news director in 1952. While there, Goode became the first African American member of the National Association of Radio and Television News Directors.

In 1962 Goode, at the age of fifty-four, became the first black network news correspondent when he was hired by ABC Television News as its United Nations (UN) reporter in New York City. The position was created when former baseball player Jackie Robinson publicly had complained to ABC executives about the lack of black reporters. Goode was hired over forty other candidates.

After a few months on the job, Goode received his first major assignment: covering the Cuban Missile Crisis that involved the United States, the Soviet Union, and Cuba. His coverage of the crisis earned him the respect of his colleagues both at ABC and at the other networks. He also became a celebrity among African Americans.

In 1963 Goode traveled overseas with other black colleagues where for two months he helped teach journalism in Nigeria, Tanzania, and Ethiopia to more than one hundred students in various seminars. He returned home and continued to report important stories, including the 1965 assassination of Malcolm X and the 1968 assassination of Dr. Martin Luther King Jr., and both the Democratic and Republican National Conventions in 1968. Goode remained with ABC until his retirement in 1973. He continued working for the National Black Network, covering the United Nations and politics through the 1980s.

During his lifetime, Goode was a member of numerous organizations, including the Association of Radio-TV Analysts, the National Association of Radio and TV News Directors, and the United Nations Correspondents Association where he served as president in 1972. Goode was also a member of the 100 Black Men of America in New York. His many awards doing his career included “Man of the Year” by Alpha Phi Alpha Fraternity (he was also a member of the fraternity), the Mary McLeod Bethune Award from Bethune-Cookman College, the Michelle Clark Award from the Columbia University School of Journalism, and an award from the Polish Government through the United Nations in 1972. Goode married Mary Lavelle on September 26, 1936. The couple had six children. Malvin Russell Goode, a member of Alpha Phi Alpha Fraternity, died of a stroke on September 12, 1995, at the age of eighty-seven in Pittsburgh, Pennsylvania.