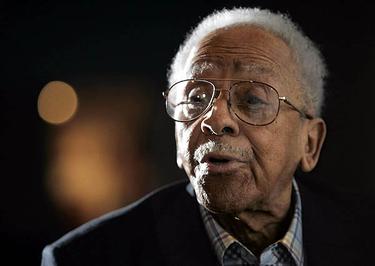 James Herbert Cameron Jr. was a civil rights activist responsible for founding three chapters of the National Association for the Advancement of Colored People (NAACP). He later established America’s Black Holocaust Museum in Milwaukee, Wisconsin. Cameron is also the only known person to have survived a lynching.

Cameron was born on February 24, 1914, in La Crosse, Wisconsin. His father, James Herbert Cameron, was a barber, and his mother, Vera Carter, washed clothes to help support the family’s three children. Cameron’s father left the family when he was young, and his mother moved them to Marion, Indiana.

Cameron was a shoeshine boy and well known around town. While out walking late on August 7, 1930, Cameron and friends, Abram Smith and Thomas Shipp, came across a white couple, Claude Deeter and Mary Ball, and tried to rob them at gunpoint. Cameron recognized Deeter as a client and ran away, but Smith and Shipp attacked the couple, and Deeter was killed in the fight. All three boys were quickly caught and charged that night with murder and rape, but the latter charge was dropped at trial. By the next afternoon, a mob of almost fifteen thousand people broke into the jailhouse. Shipp was grabbed first and hung on a tree in the courthouse yard. Smith was impaled by a pipe and dead before he and Cameron were hung as well. An unidentified woman spoke from the crowd, stating that Cameron was not guilty, and he was mercifully cut down. He stumbled, unprovoked, back to the jail.

Flossie Bailey, a local NAACP official, made several unsuccessful attempts to bring the mob leaders to justice, but all charges were dropped for lack of evidence. In 1931 Cameron was convicted of “an accessory before the fact to voluntary manslaughter” of Claude Deeter and sentenced up to twenty-one years of which he served five years before being paroled. He was pardoned by the state of Indiana in 1991.

Cameron moved to Detroit, Michigan, obtained employment at Stroh Brewing Company, and attended Wayne State University to become a boiler engineer. In 1938 Cameron met and married Virginia Hamilton, and the couple had five children: Virgil, Herbert, Dolores, David, and Walter. Cameron returned to Indiana in 1943 and devoted his life to promoting racial equality and fighting for civil rights. He founded four chapters of the NAACP in Indiana and became the first president of the Anderson, Indiana branch. In 1942 Indiana Gov. Henry F. Strickler appointed Cameron as the state director of civil liberties, reporting violations to the equal accommodations law.

Years of death threats and violence finally forced Cameron to move on to Milwaukee in 1950 while he continued to fight for civil liberties. He was with Dr. Martin Luther King during the 1963 March on Washington, D.C. and, with Coretta Scott King and Jesse Jackson, participated in the 1968 Poor People’s March on Washington shortly after Dr. King’s assassination. While Cameron was incarcerated, he wrote a memoir entitled, A Time of Terror: A Survivor’s Story. After being turned down by publishers for over fifty years, in 1982 Cameron remortgaged his home to self-publish his memoir. Between 1955 and 1989, Cameron published hundreds of articles and booklets that detailed occurrences of racial injustice in the United States. In 1988 along with his wife Virginia, Cameron founded America’s Black Holocaust Museum in Milwaukee. The museum closed in 2008 due to lack of funding but was re-opened on Cameron’s birthday, February 25, 2012, as a virtual museum. On June 11, 2006, James Cameron died in Milwaukee at the age of ninety-two, from congestive heart failure.