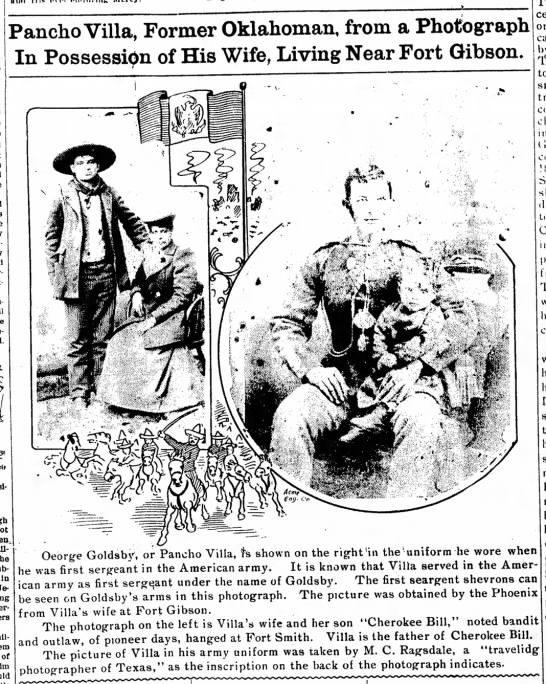 George Goldsby, a.k.a. George Gooseby, a.k.a. William Scott, was a veteran of the Union Army and a sergeant in the Tenth U.S. Cavalry (“buffalo soldiers”).  His involvement in a shooting incident near Fort Concho, Texas and subsequent disappearance created an aura of frontier mystery surrounding his name.  Goldsby appeared as a character in nineteenth- and twentieth-century fiction.  Scholars remember him for his periodic crossing of racial boundaries, presenting himself at various times as white or black depending on circumstance.

Goldsby claimed he was born in Perry County, Alabama, the son of Hester King, a mixed-race woman, and Thornton Boykin Goldsby, a plantation owner.  Thornton fathered several children by Hester, although no records to date mention her as George’s mother or his personally having been enslaved.  First employed as a hired servant with the Confederate Army at Gettysburg, Pennsylvania, Goldsby defected to the other side and worked as a civilian teamster for a Union quartermaster.  In August 1864, the light-skinned young man enlisted under the name George Gooseby in the 21st Pennsylvania Cavalry, a white unit.  After Appomattox, “Gooseby” returned briefly to the Selma, Alabama area before heading west to Indian Territory.  There, in September 1867, he enlisted again in the U.S. Army, this time with the Tenth Cavalry—an all-black regiment—under his original name.

Few details are known about Goldsby’s service from 1867 to 1878.  Assigned to Company D at Fort Sill, Indian Territory, he would have delivered mail and payroll shipments across dangerous terrain, and, after the Tenth was relocated to Fort Concho, Texas, he likely participated in campaigns against Comanche and Mexican raiders.  In 1874, he married Ellen Beck, an Afro-Cherokee, by whom he sired four children.  Their oldest son, Crawford, became known in the 1890s as the outlaw “Cherokee Bill” for a series of murders in eastern Oklahoma.

The harsh animosity that greeted black U.S. soldiers in Texas, and particularly in the rough civilian town of Santa Angela (now San Angelo), became a defining moment in Goldsby’s life.  In February 1878, he rallied a group of fellow African American soldiers in seizing carbine rifles from the company arms rack.  From there, they entered a saloon and engaged in a gunfight with a group of white cowboys and buffalo hunters who had assaulted Goldsby earlier that day.  The subsequent violence ended the lives of three civilians and a soldier.  Facing civil and military punishment, Goldsby deserted the Army in May 1879.

Stories about Goldsby abounded in the decades that followed.  The saloon fight was immortalized in a short story by Frederic Remington which appeared in Collier’s in 1901.  During the 1910s, rumors circulated that the Mexican revolutionary Pancho Villa was in fact Goldsby.  West Texas fiction writer Elmer Kelton made a Goldsby-like character the protagonist of his “buffalo soldier” novel, The Wolf and the Buffalo.  Goldsby’s true life after 1878 was not that dramatic; taking the pseudonym William Scott, he married a white woman named Effie Henshaw and farmed land near Cherryvale, Kansas.  Not until after his death at age 78 did his name reappear in official records when his first wife, Ellen, successfully filed a widow’s pension claim based on his Union Army service.