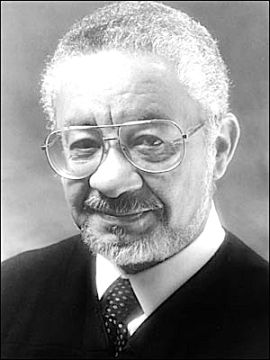 As a young activist, Allen Broussard fought for racial justice, equal opportunity, and civil liberties.  Those campaigns inspired him to study the law.  He connected with the community throughout his career as an attorney, judge, and committee member.  Broussard authored key opinions on the death penalty and the environment while on the California Supreme Court.  He is best known as the dissenting liberal judge on the California Supreme Court at a time when the state’s voters had removed most of the liberal judges on the bench.

Broussard was born in Lake Charles, Louisiana in 1929 to Eugenia and Clemiere Broussard.  The family moved to the San Francisco Bay Area in 1945 at the end of World War II in search of greater opportunities.  There Eugenia worked as a seamstress and Clemiere as a longshoreman.

In 1945 Broussard enrolled in San Francisco City College where he served as student chapter president of the National Association for the Advancement of Colored People (NAACP).  His chapter was part of a citywide effort to get the first African American high school teacher and policeman hired by the City of San Francisco.  He also helped to secure union jobs that had previously been closed to African Americans.

After graduating from the University of California at Berkeley in 1950, Broussard enrolled at the Boalt Hall School of Law at the University of California at Berkeley.  He was one of three African Americans in a class of 106.  Broussard became the first African American at Boalt admitted to the Phi Alpha Delta law fraternity. He graduated from law school in 1953, spent two years in the United States Army, and was admitted to the bar in 1954.

In 1955 Broussard began working as a research attorney for Judge Raymond Peters of the First Appellate District Court. In 1959, Broussard joined the Wilson, Metoyer and Sweeny Law firm as an associate and became partner there two years later.  Also in 1959 he married Odessa Monroe. The couple eventually had two children.

By 1986 three of Broussard’s liberal colleagues on the Court were ousted in a statewide election leaving Broussard as both the racial and ideological minority on the state’s highest bench.  In that role he authored a number of dissenting opinions, most notably an opinion about indigent health care, the death penalty, and municipality rights concerning the environment and imminent domain.  Broussard stepped down from the California Supreme Court in 1991.

Allen Broussard, a member of Sigma Pi Phi fraternity, died in Oakland, California on November 5, 1996.  He was 67.