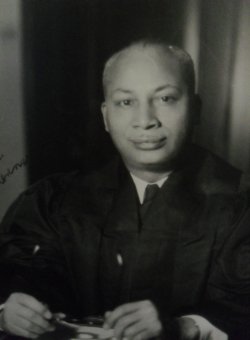 Harold A. Stevens
Fair use image

With his appointment in 1955 as the first African American to serve on the New York State Supreme Court, Harold Arnoldus Stevens continued a string of firsts that began in 1950 when he was elected to the New York Court of General Sessions, becoming the first African American to sit on that bench. Five years later, in 1955, he was appointed by New York Governor W. Averill Harriman to fill a vacancy on the New York Supreme Court. In November 1955 he was elected to serve a full fourteen-year term on the Court.

Beginning in 1958 Justice Stevens sat on the Appellate Division of the court, again becoming the first African American in the post, and in 1969, Gov. Nelson Rockefeller designated him to serve as Presiding Justice of the State Supreme Court, again a first.  In 1974, Gov. Malcolm Wilson appointed him to the New York Court of Appeals to fill a vacancy.  At that time Justice Stevens held the highest rank of any African American in a state judicial system in the U.S. He was also the first African American to hold a seat on the New York Court of Appeals.  When he sought a full term on that court, he was defeated and returned to his position as Presiding Justice of the Appellate Division of the New York State Supreme Court.

While on the New York State Supreme Court for two decades Justice Stevens helped push much-needed reforms in the criminal justice system. One important innovation was his creation of “sentencing panels” to review cases to avoid sentencing disparities that reflected differences in race and economic status. He also crafted procedures to mediate medical malpractice cases and ease court crowding. Justice Stevens retired from the bench in 1977.

Justice Harold Arnoldus Stevens was born on October 19, 1907 in John’s Island, South Carolina on a 1,000-acre farm owned by his father, William F. Stevens. His mother was Lilla L. Johnson Stevens. In 1930, Stevens graduated with a bachelor’s degree from Benedict College in Columbia, South Carolina. After being rejected from the then all-white University of South Carolina Law School, Stevens moved north and became the first African American to earn a degree in labor law from Boston College in Massachusetts in 1936.

Nearly twenty years after graduating law school, Justice Stevens explained why he decided to pursue a law degree. As a young man in 1926, Justice Stevens witnessed a black woman and her two brothers, accused of killing a sheriff, being dragged from the county jail in Aiken, South Carolina and towed through town behind a car, shot and mutilated. “There was no voice of protest raised,” Stevens recalled. “Then I was inspired to study law because it was our best bet to eliminate things like this.”

In the early 1940s Stevens worked for the Brotherhood of Sleeping Car Porters but in 1943 he enlisted in the United States Army.  After World War II ended he served briefly as Special Counsel to the Fair Employment Practices Committee (FEPC). From 1947 to 1950 he was a member of the New York State Assembly where he represented the 13th District. In 1954 he received the Pro Ecclesia et Pontifice award from Pope Pius XII in recognition of outstanding Catholic Service.

Justice Harold A. Stevens died on November 9, 1990 in Harlem, New York at the age of 83, survived in death by his wife, the former Ella C. Myers, the couple had no children.