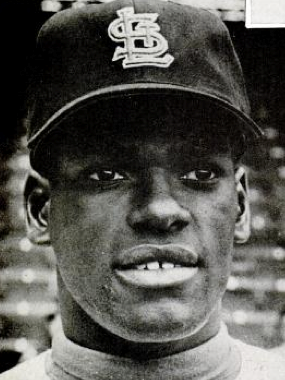 By high school Gibson had overcome most of his childhood illnesses and become a multisport athlete at Omaha Technical High School. By his senior year, however, he concentrated on baseball, and in 1952 the Kansas City (Missouri) Monarchs attempted to sign the 17-year-old.  When he graduated one year later the St. Louis Cardinals attempted to sign him to a minor league contract. He declined, opting to attend Creighton University in Omaha which extended him a scholarship to play basketball.  He would become Creighton’s first African American athlete to play both varsity basketball and baseball.

Gibson joined the St. Louis Cardinals Triple-A farm club as a pitcher in 1957, signing a contract for $3,000 with a $1,000 signing bonus. In the offseason, he played for the Harlem Globetrotters, earning another $4,000 annually. In 1958 Gibson signed a contract with the Cardinals which doubled his salary and eliminated his need to play for the Globetrotters.

The next three years, until mid 1961, he would spend with the Redbird farm system in Columbus, Georgia. He finished in the majors that year with 12 wins and 13 losses, and struck out 166 batters.  He remained with the Cardinals in the Major League from 1962 to 1972 and ranked among the best of all major league pitchers.  His most notable year was 1968, when he won 22 of the 31 games he appeared in, threw for 305 innings, had 13 shut outs, and struck out a league-leading 268 batters. He finished the season with a record breaking 1.12 ERA for a pitcher throwing for over 300 innings. Gibson’s achievements would earn him both the prestigious Cy Young Award and Most Valuable Player of the Year Award.

Although his career had slowed by 1971, due to various injuries, he continued to play until his retirement in 1975.  Six years later in 1981, he was a near unanimous choice for the National Baseball Hall of Fame. Gibson finished his career having pitched in 528 games with 251 wins, 174 losses, 56 shutouts, 3,117 strikeouts, and career average 2.91 ERA.

After retirement, Gibson served as pitching coach to the New York Mets in 1981, and with the Atlanta Braves from 1982 to 1984.  He returned to the Cardinals organization in 1994 as assistant coach to Manager Joe Torre. In between, he served as a radio announcer for the St. Louis Cardinals, ran a restaurant, served as chair of the board of a St. Louis bank and owned interest in a St. Louis radio station.