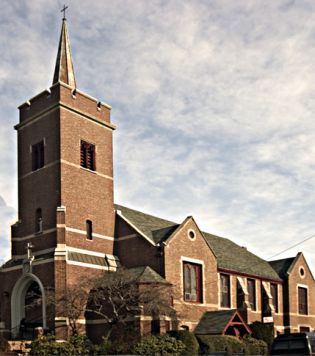 The Church of St. Mark in Brooklyn, New York was originally established by a group of black Episcopalians in 1838.  The next year, Dr. Samuel M. Haskins was asked to be rector (pastor), the role he would maintain for 60 years.  By April 1841 the congregation completed a Gothic style edifice in Manhattan on the corner of Bedford Ave. and South Fifth Street in Brooklyn.  This building was used by the church for the next 60 years until it was condemned in 1896 to allow access to the new “East River” (Brooklyn) Bridge.

A church committee was formed to find a new location and in 1898 a six lot piece of land was obtained, surrounded by Eastern Parkway, Brooklyn Avenue, and Union Street.  Although the congregation planned to build an expansive collection of buildings including a new church, parish house, rectory, as well as others, they determined to start with the parish house.  Because of the prolonged construction, the house would include a room for worship and would serve as the church until the expansion could be made.

Construction began on January 26, 1901.  Designed by one of New York City’s leading architectural firms, Henry M. Congdon & Son, the parish house was an impressive structure of Gothic design with a cellar, gymnasium, billiard room, parlor, kitchen, library, choir room, classrooms, and of course, the main assembly room. The building was opened on September 8, 1901 and officially became the Church of St. Mark.

The planned expansion never occurred, most likely due to the Great Depression.  On October 1, 1929 the remaining portion of the property was sold to a developer for $1,500,000 for the construction of a fifteen-story apartment building.  In 1937, the parish house became a church in appearance when a new façade and tower were added, making it the structure that church members would now recognize.