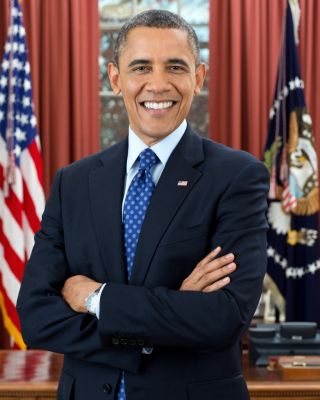 Barack Obama was the 44th President of the United States and the first African American to occupy the White House.  Obama was born August 4, 1961, in Honolulu, Hawaii. His father, Barack Obama Sr., was a Kenyan graduate student studying in the United States, and his mother, Stanley Ann Dunham, a white American from Wichita, Kansas.  The two were married on February 2, 1961, in Maui, Hawaii.  In 1971, when he was ten, Obama’s mother, who had remarried and was living in Indonesia, sent him to Honolulu, Hawaii to live with his maternal grandparents Madelyn and Stanley Dunham for several years, where he attended Punahou, a prestigious preparatory school.  Obama was admitted on a scholarship with the assistance of his grandparents.

Obama continued his higher education at Occidental College, Los Angeles, California.  He later transferred to Columbia University in New York City, New York, graduating with a Bachelor’s (B.A.) in 1983.  He attended law school at Harvard University, receiving his law degree (J.D.) in 1992. While at Harvard, Obama was president of the Harvard Law Review. After relocating to Chicago he began working as a community organizer and later lecturing at the University of Chicago Law School on the subject of constitutional law.

In 1989, Obama met Michelle Robinson, who was an attorney at the Chicago law firm of Sidney and Austin at the time. Obama was a summer intern for the firm that year.  Three years later, in 1992, they were married.  Their two daughters, Malia and Natasha (Sasha) were born in Chicago in 1999 and 2001, respectively.

In 1994, Obama was elected to the Illinois State Senate from an economically diverse district that includes Hyde Park (surrounding the University of Chicago) as well as working-class African American neighborhoods in the heart of Chicago’s South Side.  Obama remained in the state senate until 2004.

During his tenure in the Illinois State Senate, Obama helped craft legislation to create the state Earned Income Tax Credit which reduced the tax bill of working class families by an estimated one million dollars. Obama also supported early education programs for children of working-class families and drafted legislation requiring the videotaping of interrogations and confessions in all capital cases.

In 2004, Obama was elected to the United States Senate from Illinois.  During the campaign, he gained national prominence as a keynote speaker at the Democratic National Convention in Boston in July 2004.  The speech, seen by millions of Americans across the nation, combined with his overwhelming victory in November over Republican Alan Keyes, catapulted Obama into contention as a possible Democratic presidential candidate in 2008.

On February 10, 2007, Barack Obama announced his candidacy for the President of the United States in Springfield, Illinois. He waged a political campaign that caught the imagination of millions of Americans.  On June 3, 2008, after all of the state primary contests were decided, Obama had secured enough pledged delegates to become the presumptive nominee of the Democratic Party. His broad appeal and message of hope, change, and “yes we can,” which had been his battle cry throughout the primary against New York Senator Hillary Rodham Clinton, his principal rival for the nomination, quickly became the central theme of his campaign against Arizona Senator John McCain, the Republican nominee, during the national election. His message continued to energize various segments of the American voting public including millions of first-time voters.

Obama was the first candidate in a presidential contest to utilize cell phone technology and the internet to promote his campaign. He also raised more money, approximately $750 million, than any other candidate in the history of American politics. His unprecedented victory redefined the electoral map as he carried several key states such as Virginia, Indiana, Florida, North Carolina, and Ohio that had been traditionally Republican strongholds. By the end of election night, Obama had racked up 349 electoral votes to Republican candidate John McCain’s 159 votes.

On January 20, 2009, Barack Obama began his first term as the President of the United States.  That term was marked by one of the most active and successful legislative agendas since President Lyndon B. Johnson’s Great Society program of the mid-1960s.  Early in his term, Obama proposed a series of measures eventually enacted by the U.S. Congress to respond to the economic recession that rapidly crippled the nation beginning in 2008 and led to the greatest economic downturn since the Great Depression of the 1930s.  They included the American Recovery and Reinvestment Act of 2009 and the Tax Relief, Unemployment Insurance Reauthorization, and Job Creation Act of 2010 which were passed to combat unemployment and stimulate economic activity.  The Dodd-Frank Wall Street Reform and Consumer Protection Act, also passed in 2010, was designed to strengthen governmental regulation over the banking and financial services industries, while the Budget Control Act of 2011 and the American Taxpayer Relief Act of 2012 were later additional measures put in place to fight the continuing effects of the recession.

Obama’s legislative agenda included other reforms.  The Don’t Ask, Don’t Tell Repeal Act of 2010 allowed for the first time the full participation of gays and lesbians in the U.S. Armed Forces.  In May of 2012 President Obama became the first sitting president to publicly endorse legalizing same-sex marriage.

The Patient Protection and Affordable Care Act (often called Obamacare) became by far the most controversial measure of his first term.  The Act, designed to overhaul and streamline existing government healthcare programs such as Medicare and Medicaid, also extended coverage to previously uninsured Americans, reducing the number by half from 60 million to 30 million.  This generated unprecedented united opposition from Senate and House Republicans before being narrowly passed by a series of votes in both houses of Congress between December 2009 and January 2010.  The bill was signed into law by President Obama on March 23, 2012.  The Act withstood a series of legal challenges until it was upheld by the U.S. Supreme Court on June 28, 2012.

Obama’s foreign policy accomplishments included de-escalating U.S. military involvement in Iraq, negotiating a new arms control treaty with Russia, and ordering the military operation which killed Osama bin Laden over a decade after he orchestrated the 9/11 terror attacks on New York City and Washington, D.C.  Nine months after taking office President Obama became only the third U.S. president (after Theodore Roosevelt and Woodrow Wilson) to be awarded the Nobel Peace Prize while in office.

In 2012, President Obama faced former Massachusetts Governor Willard “Mitt” Romney, the Republican nominee in the presidential election.  Obama won the contest garnering 332 electoral votes to Romney’s 206. In doing so Obama also became the first Democratic President since Franklin Roosevelt to be elected and reelected with at least 51 percent of the vote.

On January 20, 2013, Barack Obama began his second term as President of the United States.

On March 13, 2022, Barack Obama announced that he had tested positive for COVID. Obama, who is vaccinated and boosted, only experienced mild symptoms.