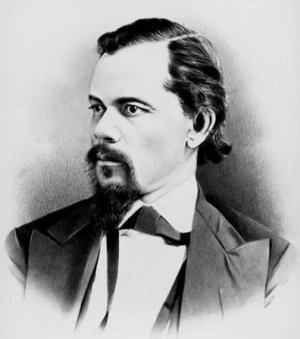 The influential 19th century spiritualist and author Paschal Beverly Randolph was born October 8, 1825 in New York City. According to contemporary researchers he was likely the illegitimate son of William Randon, a white man, and Flora Clark, an African American woman. Soon abandoned by his father and the untimely death of his mother left him having to survive as best he could as a boy on the streets of the city’s notorious Five Points slum district. He essentially taught himself to read and write. He also worked as a bootblack, a dyer, a barber, and a ship’s cabin boy and deckhand.

By his early twenties, Randolph, attracted to the revival of occultism, began crystallizing his own thoughts on spiritualism and the occult. He married an African American woman known as Mary Jane, with whom he had three children, and then married Kate Corson, an Irish American woman with whom he had three children. The large family complicated his quest for financial security. Moreover, he was quite sensitive to the fact that his light brown skin limited his professional mobility and forced him to “reinvent” himself, manufacturing an impressive but false genealogy that included prominent white Virginia colonists, Spaniards, and a Queen of Madagascar in his lineage. He also falsely claimed that his first wife was Native American, not African American. Handsome, learned, and well-spoken, Randolph, who purported to be a medical doctor, found his stride on the lecture circuit speaking across the United States and in Europe and the Caribbean on occult esoterica, trance mediumship, clairvoyance, sexual magic, medical potions, abolition of slavery, women’s rights, and the importance of literacy.

Today Randolph is largely remembered for proselytizing Rosicrucianism through his many books and pamphlets. Promoting the study of ancient esoteric mystical doctrines, in 1858 he founded the Fraternitas Rosae Crucis which led to the establishment in San Francisco of the nation’s first Rosicrucian lodge. Among his seventeen known monographs were The Unveiling; Or What I Think of Spiritualism [With] Medicinal Formulas (1860) in which he criticized traditional spiritualism as turning people away from faith in Christ “without giving us a substitute;” Pre-Adamite Man: The Story of the Human Race, From 35,000 to 100,000 Years Ago! (1863), that traced civilized human existence far earlier than then generally accepted; Love and Its Hidden History (1869), his bestselling work on sexual attraction and male-female relationships that went through several editions and the fictional novel The Wonderful Story of Ravalette (1863). From 1852 to 1861, he also served as editor of The Messenger of Light and The Journal of Progress in which his initial literary works appeared.

Randolph firmly believed that had he been white, his ideas and writings would have been more widely accepted and that he was compelled to simply label ideas Rosicrucian in order to convey his own thoughts on a host of matters. Alcoholic, destitute, resentful of the slights of white spiritualists, and distrustful of his wife, Paschal Beverly Randolph committed suicide with a revolver in the presence of a neighbor in Toledo, Ohio, on July 29, 1875 at age 49.