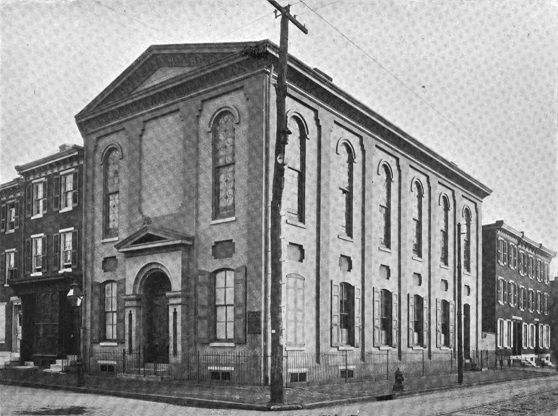 In the early years, Gloucester preached in homes, rented spaces, or if the crowd was large enough, on the empty lot at the corner of Seventh and Shippen (now Bainbridge) Streets. In 1809, First Colored Presbyterian, as it was first named, was chartered by the Supreme Court of Pennsylvania and by 1811, the lot where Gloucester gave his first sermons was purchased and the church’s first edifice was built. In 1966, the church changed its name to First African Presbyterian Church.

Reverend Gloucester believed that the Christian education of the congregation would be further enhanced if the members could read the Bible for themselves, and therefore established a Sabbath School. Many graduates went on to become Presbyterian ministers including Gloucester’s four sons, John Jr, Stephen, Jeremiah, and James Gloucester, as well as Samuel Eli Cornish, Thomas Amos, and Jonathan Gibbs, who all returned to later be installed as pastors of their home church.

Over the years, the church’s membership has been as rich as its history. Some early members include Cyrus Bustill, a baker who delivered bread to General George Washington, and Hannah Till, the cook to General Washington and the Marquis De Lafayette. Others famous members are Underground Railroad conductor William Still, Lebanon Cemetery owner Jacob C. White, The Pyramid Club owner Walter F. Jerrick, co-founders of the baseball club The Philadelphia Pythians Octavius Catto and Jacob C. White Jr., abolitionist Nathaniel Depee, photographer John Mosley, and Tuskegee Airman Donald Harris. Current members of this church have ties that go back as far as six generations.

First African Presbyterian Church has installed 18 pastors in its two centuries of history. The most prominent and fondly remembered pastors are Rev. William T. Catto (1854-1859) who compiled the first written history of the church and was also a conductor in the Underground Railroad, Rev. Eugene A. Mitchell (1930-1937) who led the church during the Great Depression, and Rev. Sudor Q. Mitchell (1940-1947), the World War II era pastor. Both Mitchells never retired and remained in the pulpit until almost the day of their deaths.  Rev. Shelton B. Waters (1947- 1969) became the second African American to be named Moderator to the Philadelphia Presbytery.

Currently the church is involved in numerous food programs and a weekly community health clinic that has operated for over 15 years. In May 2015, First African Presbyterian Church will be celebrating 208 years of continuous ministry.

Arthur T. Boyer, Brief Historical Sketch of The First African
Presbyterian Church of Philadelphia, Along with Rev. William Catto’s
History and Discourse From 1807-1940

(Philadelphia: Privately Published,
1944); We Have This Ministry, A History of the First African
Presbyterian Church (Philadelphia: The Winchell Company, 1994); George
M. Apperson, “The Emancipation and Ordination of a Tennessee slave,”
Presbyterian Voice, September 1999.