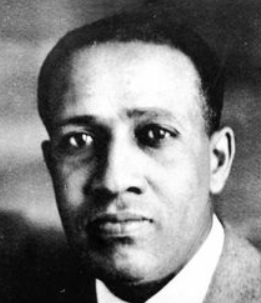 King Daniel Ganaway, a 39-year-old butler on Lake Shore Drive in Chicago, Illinois rose to fame in 1921 by winning the first place prize in national photographic contest sponsored by Philadelphia, Pennsylvania Department Store Owner John Wanamaker. Titled “The Spirit of Transportation,” the photograph was one of 900 entries. Ganaway’s camera lens captured the two engines of the 20th Century Limited as they came to the end of their run at the La Salle Street Station in Chicago. His entry was chosen over others submitted by professional photographers. He also won an Honorable Mention for another photograph, titled “Children in the Country.”

Born October 22, 1882 in Murfreesboro, Tennessee, King Daniel’s parents were King and Hattie Ganaway. He was named after his father King and his grandfather Daniel. His devout Christian faith led King in 1903 at the age of 21 to leave Tennessee to join the Christian Catholic Church, a religious community in Zion, Illinois under the leadership of John Alexander Dowie. After nine months of waiting tables there he decided to move to Chicago.

While waiting on a train platform, a wealthy widow, Mrs. Edward F. Lawrence, took notice of Ganaway, interviewed him on the platform, and hired him that day to be trained to serve as her butler. After performing his duties all day, his hands were too tired to enjoy his hobby of drawing. Consequently, he taught himself the art of photography on his one day off every two weeks. Ganaway remained as an employee with Mrs. Lawrence until 1921.

After the significant Wanamaker win, Ganaway began his career as a commercial photographer. Many of his photographs of the landscapes of Chicago parks and street scenes were published in The America To-day Combined with Fort Dearborn Magazine in the 1920s.  America To-day editor W. Frank McClure stated, “Ganaway is the greatest photographer I have ever known.”

Also during this time period, his photographs were published in National Geographic Magazine, The Chicago Daily News as well as manufacturing catalogs and school textbooks. In 1925, African American newspaper owner Anthony Overton hired Ganaway to be the staff photographer at The Chicago Bee.

Ganaway exhibited in the Negro in Art Week at the Chicago Art Institute in 1927 and his photographs were also a part of the William E. Harmon Exhibits that toured throughout the United States in the 1930s.  His photographs were also exhibited in the 1933 World Exposition in Chicago, the Photographic Salon, and at the Museum of Science and History.

King Daniel Ganaway died on March 16, 1944.  No known marriage certificates exist in Chicago; however, a 14 year union with a Swedish immigrant, Pauline Barrew, left him one survivor: a daughter named Lucille Brody.  Major pieces in Ganaway’s collections eventually ended up in the Library of Congress, various museums, and private residences.