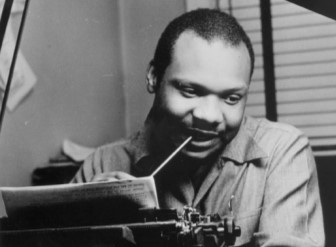 Richard Durham’s Destination Freedom radio program, which aired on WMAQ in Chicago, Illinois from June 27, 1948 until its cancellation in August of 1950, was unlike anything else being broadcast over the airwaves. For over two years audiences tuned in every Sunday morning and were treated to dramatized stories featuring prominent African Americans. The creator of Destination Freedom, Richard Durham, attempted to infuse each program with as much history as possible, while maintaining enough drama to keep the stories interesting enough to inspire his audience.

Born September 6, 1917 in Raymond, Mississippi, Richard Durham and his family moved north as part of the Great Migration. In 1923 the Durham family settled in Chicago. Durham learned how to become a radio scriptwriter while working with the Writers Project of the Works Progress Administration (WPA). Durham briefly attended Northwestern University, and he later became an award-winning investigative reporter for the Chicago Defender. Before the creation of Destination Freedom he worked on several other radio programs in Chicago, namely Democracy U.S.A., sponsored by the Chicago Defender, and Here Comes Tomorrow, considered to be the first all-black radio soap opera. Durham is, however, most well-known for Destination Freedom.

What made Destination Freedom so important was its then novel portrayal of African Americans. Durham used the program to feature strong and independent black people. The half hour scripted program featured profiles on Crispus Attucks, Denmark Vesey, and Frederick Douglass. For two years Chicago residents could tune in weekly and be treated to exciting stories that inspired hope and talked of the possibility of freedom. Destination Freedom also featured profiles of prominent antebellum abolitionists, such as William Lloyd Garrison. The series was initially underwritten by The Chicago Defender.  Later the Urban League of Chicago provided some financial assistance.

Destination Freedom was also significant for portraying black history in a popular medium. Listeners were treated to profiles of Mary Church Terrell and Harriet Tubman, among others. This focus on history was almost unheard of in African American arts, let alone a radio program. There were even programs devoted to black historians such as W.E.B DuBois and Carter G. Woodson. Durham attempted to fight the segregation, racism, and prejudice head on with his powerful messages.

The program encountered some audience and studio resistance.  WMAQ also had final approval over all scripts and refused to approve a program featuring the story of Nat Turner because of the subject, slave uprisings.  Yet over two years Durham and Destination Freedom were able to operate with relative autonomy. The radio programs crafted by Dunham stand as a precursor to the Civil Rights movement that would appear later in the 1950s.

Following the demise of Destination Freedom Durham worked on a variety of projects. During the 1960s he was the editor of Muhammad Speaks, the newspaper of the Nation of Islam.  Later Durham served as the credited ghostwriter of Muhammad Ali’s 1975 autobiography, The Greatest: My Own Story.

In 2007, Durham was posthumously inducted into the National Radio Hall of Fame.