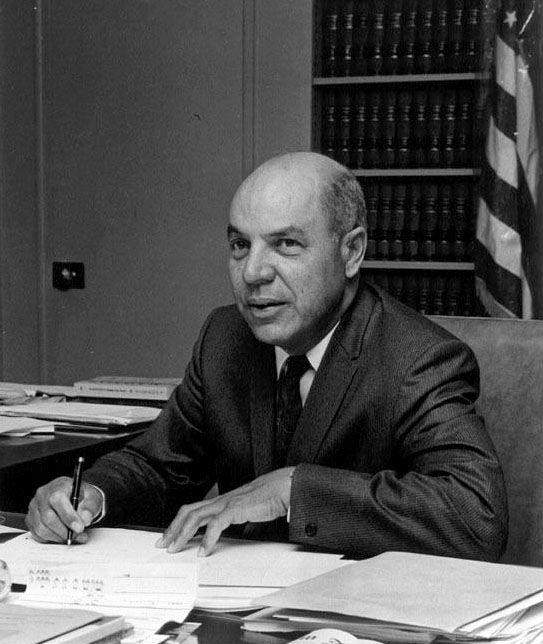 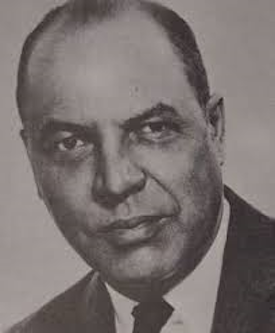 Edward Dudley was the first black American to lead a U.S. Mission abroad with the rank of Ambassador. Dudley was born on March 11, 1911 in South Boston, Virginia to Edward Richard and Nellie (Johnson) Dudley. After receiving his Bachelor’s degree from Johnson C. Smith College in Charlotte, North Carolina in 1932, Dudley briefly taught in a one-room Virginia school. He later moved to Washington, D.C., and enrolled in Howard University’s dentistry program. After deciding dentistry was not for him, Dudley moved to New York City, New York, eventually enrolling at St. John’s University where he earned a Bachelor of Laws (LL.B.) degree in 1941.  While at St. John’s he served on its prestigious Law Review.

After law school Dudley entered private practice and became active in local civil rights activities. In 1942 he was appointed to the New York Attorney General’s Office, where he served until he was recruited the following year by Thurgood Marshall, the Chief Legal Counsel of the National Association for the Advancement of Colored People (NAACP) to become a Special Assistant Counsel.  Dudley served in that capacity between 1943 and 1945. While there he wrote briefs and prepared civil rights cases for trial. In 1945, Dudley became the Legal Counsel to the Governor of the U.S. Virgin Islands.  He served Governor Charles Harwood until 1946 and then served William Hastie, the first African American appointed Governor of a U.S. Territory, until 1948.

In 1948, President Harry Truman sent Dudley to Liberia as U.S. Envoy and Minister. Upon elevation of the Mission in Liberia to a full U.S. Embassy, Dudley was promoted to the rank of Ambassador in May of 1949. With that, Ambassador Dudley became the first black Ambassador in U.S. history. This also made him the highest ranking diplomat, often referred to as the Dean of the Diplomatic Corps, in Liberia’s capital, Monrovia.

While in Liberia, Ambassador Dudley led U.S. government efforts to promote a strong commercial environment. He also continued his civil rights efforts, leading the Embassy staff on a project to research black overseas postings by the State Department.  He hoped their findings, which illustrated the lack of diversity in postings, would cause the State Department to become more racially and ethnically inclusive.

Ambassador Dudley left Liberia in 1953, returning to Harlem, the NAACP, and its Fight for Freedom Project (1953-1955).  In 1955 he received the first of a series of judicial appointments.  He was named a judge in the New York state domestic relations court (1955-1961). He then campaigned for and won a seat as the Manhattan Bureau President (1961-1965).  Upon winning the post he became the first black Chair of the New York Democratic Committee. Ambassador Dudley would serve in both posts until he was elected to the New York Supreme Court (1965).  Justice Dudley remained on the state’s high court until 1985.

After retiring in 1985, Ambassador Dudley remained socially engaged in Harlem. His life of achievement was also recognized through honorary Doctor of Laws from the University of Liberia, Morgan State College, and his alma mater, Johnson C. Smith University.

Ambassador Edward Richard Dudley, a member of Alpha Phi Alpha Fraternity, passed away February 8, 2005, one month before his 94th birthday.  He was survived by his wife, Rae Oley Dudley, their son, Edward Dudley III, and three grandchildren.