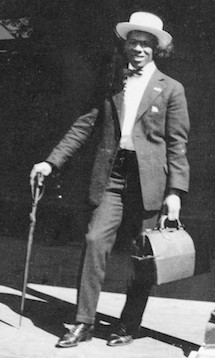 “Image Courtesy of The Black Heritage
Society of Washington”

Dr. William Henry Calhoun, a prominent early 20th century Seattle, Washington physician, was born on December 29, 1890 in Jackson, Tennessee.  Little is known about his parents or his childhood.

Calhoun attended Meharry Medical School located in Nashville, Tennessee.  The college was established in 1876 (just 14 years before he was born) as the Medical Department of Central Tennessee College.  It was one of the first medical schools in the South for African Americans, although Howard Medical School in Washington, D.C., was the first, chartered in 1868.

Following his graduation from Meharry Medical College in the early 1920s, Dr. Calhoun migrated to Seattle, Washington.  In the early Seattle years, he practiced medicine from the Chandler Annex located on East Madison Street.  He and his wife, Verna, lived in an apartment above his office.

His practice grew and by the 1940s he moved to larger offices at a new location in the Cascade Hotel Building in Pioneer Square. That practice was no doubt helped by the rapid growth of the black population in Seattle during the World War II years when it increased from just under 4,000 to more than 15,000.  In the 1940s it was unusual for an African American physician to have a practice situated in downtown Seattle rather than in the Central District, the home of most African Americans at the time.  During the 1940s Seattle had only three other black physicians: Dr. Walter Scott, Dr. Robert N. Joyner, and Dr. James E. Jackson.

Dr. Calhoun continued to practice into his 60s.  He was also engaged in the social and civic affairs of the African American community, working to improve its health and addressing its educational needs through his support of tutoring and scholarships. In 1965 at the age of 74, he was the oldest of the 11 founding members of Alpha Omicron Boule, a chapter in Sigma Pi Phi, a national fraternal organization comprised predominantly of African American professional men.

Dr. William Henry Calhoun died on February 9, 1967 in Seattle. He was 76. He was survived by his widow, Verna Calhoun.