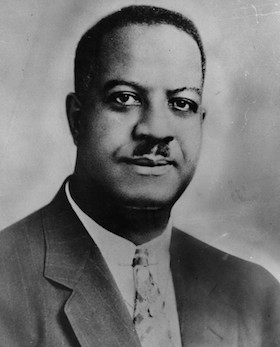 Jessie Locker was an attorney, politician, and community leader who was also the second black American to be appointed as United States Ambassador when he was sent to Liberia (1953).

Jessie Dwight Locker was born in College Hill (Cincinnati), Ohio on May 31, 1891 to Laban and Sarah Elizabeth Locker. His father, a pastor, was the first black minister in Ohio to be ordained in the Christian Church. Jessie Locker graduated as class Valedictorian from College Hill High School, and then travelled to Washington, D.C., to attend Howard University. He received his law degree from Howard University in 1915. Shortly thereafter, in 1919, Locker returned to Cincinnati and began his law practice.  He also worked as a night janitor while he built up his clientele.

Locker spent nearly 35 years practicing law in Cincinnati. He also served as a member of the Management Committee of a local Young Men’s Christian Association (YMCA) branch, a member of the Board of the Catherine Booth Homes and Hospital, a Trustee of the Harriet Beecher Stowe Memorial Home, and an Elder in the Fifth Christian Church of Cincinnati. He was also a co-founder of the Negro Sightless Society of Ohio, established in 1930 to provide services, including reading in braille, to blind members of the black community.

In 1941, Locker, a member of the Republican Party, became the first African American to be elected to the Cincinnati City Council, serving for nearly 12 years. He was elected President of the Council in 1951. Locker also served as President of the segregated Hamilton County Bar Association for Negro Lawyers.

In 1953, Locker accepted President Dwight Eisenhower’s nomination to become U.S. Ambassador to Liberia.  After U.S. Senate confirmation, he presented his credentials to Liberian President William V.S. Tubman, on October 16, 1953 in the capital city, Monrovia. During his time in Liberia, one of Ambassador Locker’s primary contributions, was leading the multi-faceted negotiations between the private sector (Pan American and US Airlines), the government of Liberia, and the United States, with regards to the operations of the Roberts Field airport, the first international airport in Liberia.

While at his post in Liberia, Ambassador Locker suffered a stroke on April 4, 1955. He passed away in Monrovia at the age of 64, on April 10, 1955. Upon return of his body to his hometown of Cincinnati, a public funeral was held for the former City Councilman and Ambassador. His funeral was the largest in the city’s history up until that time. Ambassador Locker was also the only person to lie in state at City Hall.

Ambassador Locker was survived by his wife Anna French Locker, who was a horticulturalist and at one point in time, the only black woman in the country to own a garden nursery. They also had four daughters and six grandchildren who survived Ambassador Locker as well.