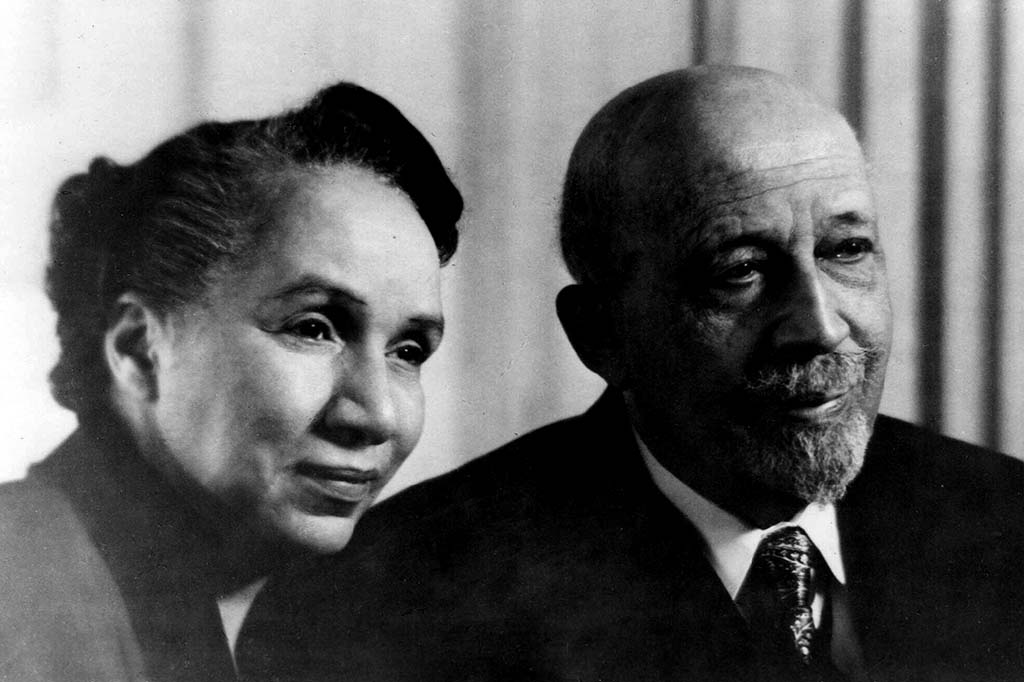 Musicologist, playwright, novelist and political activist Lola Shirley Graham, born in Indianapolis, Indiana in 1896, became the second wife to W.E.B. Du Bois in 1951.  Lola Shirley Graham was taught at a young age to stand up to injustice.  She wrote her first editorial to an Indianapolis paper protesting racial discrimination when she was 13, after she was denied access to a YWCA swimming pool.

Young Graham moved several times throughout her life as her family followed her father, African Methodist Episcopal minister, David A. Graham.  The family lived in Indianapolis, New Orleans (Louisiana), Nashville (Tennessee), Colorado Springs (Colorado) and Spokane, Washington where she graduated from Lewis and Clark High School.  Graham met and married her first husband, Shadrach McCants, when she was 21 and living in Seattle.  Her father, the minister at First AME Church in Seattle, presided over the ceremony.  Two sons, Robert and David, were born in 1923 and 1925 respectively.  In 1927 Graham and McCants divorced in Portland, Oregon.

Graham left her small children with her parents and enrolled in Oberlin College in 1931.  She eventually completed her master’s degree in fine arts and music history at Oberlin College after briefly attending the Sorbonne in France, Columbia University, Howard University and Morgan State College in Baltimore, Maryland.  While she was still a student at Oberlin, Graham’s three-act, sixteen-scene opera, Tom-Toms: An Epic of Music and The Negro, opened at Cleveland Stadium in 1932, drawing a crowd of ten thousand.  The second performance drew fifteen thousand including Newton Baker, the Governor of Ohio.  Graham became the first African American woman to write and produce an opera with an all-black cast.  Her Tom-Toms was a history of African America set against the music she composed.

Shirley Graham was also a political activist.  In 1942 she became the YWCA-USO Director of Fort Huachuca, Arizona, a military base that had fifteen thousand black men and women soldiers.  When racial tensions resulted in the death of three black soldiers, Graham defended these and other men who had engaged in protests.  She was promptly dismissed for her actions but also just as promptly hired by the National Association for the Advancement of Colored People (NAACP), and for the next year as Field Secretary she organized new branches across the nation.

In 1944 Graham wrote her first biography, Dr. George Washington Carver, Scientist.  Two years later she wrote a biography of Paul Robeson followed quickly by a profile of Frederick Douglass.  Graham also became one of the founders of the Progressive Party.  Former Vice President Henry Wallace consulted her among others before deciding to run for president under its banner. Graham gave the keynote address at the Party’s 1948 convention in Philadelphia, Pennsylvania before an audience of 12,000.  She had become, according to one historian, the living symbol of left-wing activism among African American women.

Shirley Graham and W.E.B. Du Bois had known each other since she, as a small child, met this prominent personality on a visit to her father’s home.  They became close political associates in the late 1940s partly because their beliefs and causes had aligned.  On February 27, 1951, fifty-four year old Shirley Graham and eighty-four year old W.E.B. Du Bois married in New York City, New York.  For the next decade, the famous couple fought a number of legal battles against the United States government due to his alleged connection to the Communist Party. In 1961, they both renounced their U.S. citizenship and became citizens of Ghana.  Du Bois died in Accra two years later.

Shirley Graham Du Bois remained in Accra until the overthrow of her political patron Kwame Nkrumah in 1966.  She then moved to Cairo in Egypt and from there traveled throughout Africa, Asia, Europe and occasionally the U.S. for the next decade to promote her messages of anti-imperialism and anti-colonialism.  Graham Du Bois died in Beijing, China in 1977 after losing a long battle with breast cancer.