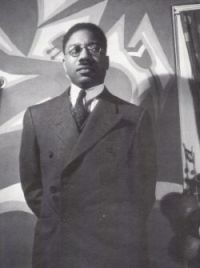 Painter and illustrator Aaron Douglas was born in Topeka, Kansas on May 26, 1899 to Aaron Douglas Sr., a baker originally from Tennessee and Elizabeth Douglas, a homemaker from Alabama.

and became one of the leading visual artists of his time.  Inspired by the work of Henry Ossawa Tanner (1859-1937), Douglas was the first African American to graduate from the University of Nebraska with a Bachelor of  Fine Arts (1922).  Douglas moved to New York where he provided leadership to visual artists by emphasizing black culture and a black aesthetic.  Described as cubist, Douglas’s style relied on traditional African designs including the illusion of multiple dimensions by painting flat surfaces with sharply contoured sides and repeating geometric forms. His work was warmly welcomed by Alain Locke and William Edward Burghardt Du Bois.  Douglas illustrated Locke’s The New Negro (1925), and reprints of Douglas’s paintings and illustrations appeared regularly in the NAACP’s The Crisis magazine.

Douglas resided in Paris, France for one year in 1931.  He later lived briefly in Haiti and the Dominican Republic.

Douglas received a Master’s from Columbia University in 1942. He studied at Winold Reiss’s School of Art in New York, and at Paris. When he returned to the United States, Douglas helped to found the Harlem Artist’s Guild.  During the Great Depression he led the guild in negotiations with the Works Progress Administration (WPA), securing Federal contracts for African American artists. In 1934, Douglas painted a series of five murals for the New York Public Library. Panel # 1, The Negro In An African Setting, pictured a dancer encircled by drummers in an African village with the “Negro” blending with, and indistinguishable from, the other figures.

Aaron Douglas taught art at Fisk University from 1937 to 1966 and while there joined Sigma Pi Phi Fraternity.  He is credited with helping to inspire what E. Franklin Frazier has called a movement toward “cultural autonomy” that culminated in the Harlem Renaissance. One of Douglas’s works, Portrait of a Young Man (a charcoal), is permanently on display at the Museum of Nebraska Art.