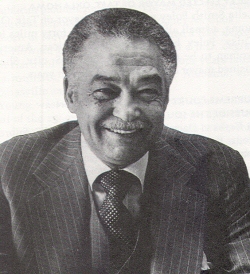 Born in Tuscaloosa, Alabama on May 25, 1918, Coleman Young arrived in Detroit, Michigan with his family when he was five.  The Colemans settled in the working class neighborhood of Black Bottom (East Detroit), where his father operated a dry cleaning business and his mother was a schoolteacher.  Early in his life Coleman suffered various forms of racial discrimination from denial of scholarships to a racially motivated firing at an automobile plant.

During the Second World War, Coleman was one of the Tuskegee Airmen, serving as a bombardier-navigator, but he was discharged after demanding service at an all-white officers club in Indiana.  After the war he returned to Detroit, where he worked as a union organizer, and campaigned for Progressive Party presidential candidate Henry Wallace in 1948.  His activism with the leftist Progressive Party drew the hostility of mainstream labor leaders like UAW president Walter Reuther. Young lost his union position and later gave defiant testimony to the House Un-American Activities Committee.  Blacklisted by the labor establishment, he went through intense personal difficulties, and was married and divorced twice.

During the 1960s Coleman began a climb up the ranks of the local Democratic Party, and in 1973 when he was elected Mayor of Detroit; he became the first African American to head a major U.S. city.  Coleman’s efforts to reform the police department angered white conservatives while his refusal to support court-ordered busing angered mainstream liberals.  His twenty-year tenure as mayor saw the construction of the riverfront Renaissance Center, and other projects which created hundreds of jobs for African Americans.  His blunt, sometimes profane, style made him a target for the media, with whom he often sparred.  His companion for most of his life, after his two divorces, once said of him, “The city is Coleman Young’s girlfriend, not Joyce Garrett.”   Coleman Young died in Detroit on November 29, 1997 at the age of 79.