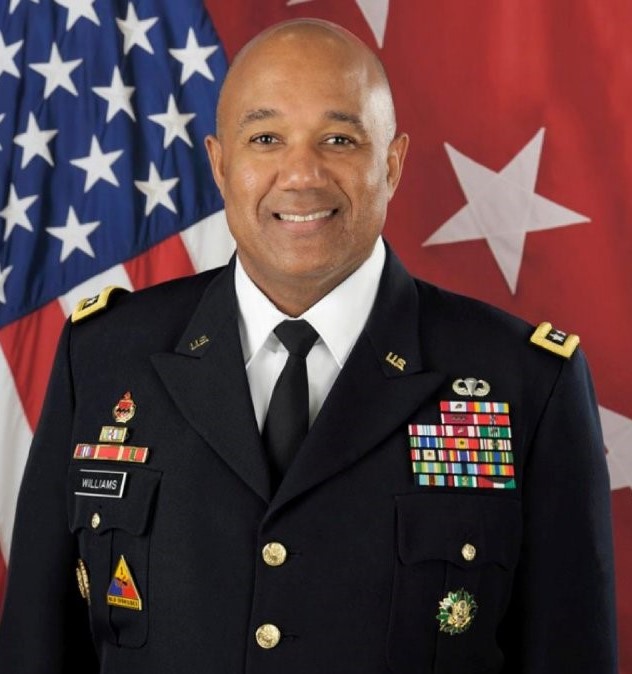 Darryl A. Williams
Fair use image

On July 2, 2018, Lieutenant General Darryl A. Williams became the first African American to be sworn in to lead the United States Military Academy at West Point, New York. Born in Alexandria, Virginia, the son of former Army officer Lonnie Buford Williams, Darryl A. Williams, himself a cadet at the Academy earned the distinction of serving as Vice Wing Commander. Graduating in 1983, he was commissioned a field artillery Second Lieutenant.

Upon completing an assignment as a platoon leader in Scheinfurt, Germany, Williams was assigned to Fort Bragg, North Carolina, then was deployed to the Persian Gulf to participate in both Operations Desert Shield and Desert Storm, 1990 to 1991. Williams returned to the Academy to pursue a master’s degree in leadership development and obtained another master’s degree in national security and strategic studies. In the late 1990s he authored papers pertaining to the command of troops and unified military operations published by the U.S. Army Command and General Staff College and the School of Advanced Military Studies. He also served as a tactical officer for the U.S. Corps of Cadets; and from 1998 to 2000 he was Army Aide to President Bill Clinton. Additional leadership experience followed in Germany and the United States.

Promoted to Lieutenant General, on June 24, 2016, Williams assumed command of Allied Land Command (LANDCOM), a support entity for the North Atlantic Treaty Organization (NATO) headquartered in Izmir, Turkey. Appointed officially as Superintendent (equivalent of President or Chancellor) of the U.S. Military Academy, the 60th leader in its 140-year history, Williams succeeded Lt. Gen. Robert L. Caslen, his former tactical officer and football coach during his days as a cadet.

Williams and his wife, Erin, have a daughter, Kendall, and two son, Zach and Nathan, who are extending a family tradition, are both are U.S. Army officers.