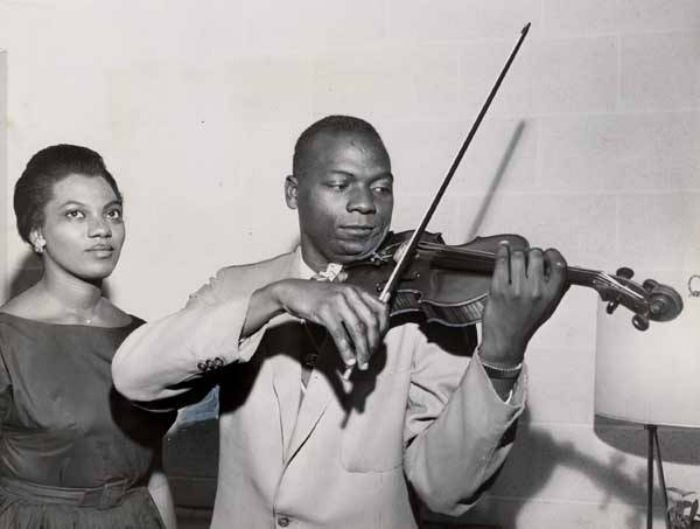 As a child, concert violinist and professor Elwyn A. Adams was a musical prodigy of some notoriety in the African American community of Cleveland, Ohio, where he was born on August 3, 1933. At age five he gave his first violin recital at East Mt. Zion Baptist Church, and at age seven he could be heard on local radio. While still a child his family separated. He and his younger sister, Armenta, along with their mother, Estella, moved from Cleveland to Boston, leaving behind their father, Albert, who continued to support his wife and children. Adams’ new home was located in the neighborhood where white students walked past their home to attend the New England Conservatory of Music. This daily scene provided additional motivation for both Elwyn and Armeta to keep on track toward a career in music. Both eventually entered the Conservatory.

Adams, studying with Richard Burgin, concertmaster of the Boston Symphony Orchestra, acquired his bachelor’s degree in music with honors in 1956. He moved to Europe and studied with the Belgian violinist Arthur Grumiaux at the Royal Conservatory of Brussels (Brussels Conservatoire), after which he placed high in a number of prestigious international violin competitions. Early in his professional life Adams received his greatest honor, a violin from Queen Lilian of Belgium, that was once owned by revered Belgium composer, Eugene Ysaye, and handmade by the French luthier Jean-Baptiste Vuillaume (1798-1875). Queen Lilian presented the violin following his outstanding performance at the 1959 Queen Elizabeth Competition. Adams at the time was 26.

Among his other recognitions were First Prize in Violin and Second Prize in Chamber Music at the Royal Conservatory of Brussels; First Prize at the Fourth International Music Competition in Munich, Germany; and Third Prize at an international violin contest in Moscow (then the Soviet Union) presented by the renowned Russian violinist Davis Fyodorovich Oistrakh. In 1967, Adams received the Award of the Eugene Ysaye Foundation in Brussels.

During the 1960s Adams was concertmaster with the Symphony Orchestra of Quebec and the Symphony Orchestra of Bordeaux, France. He gave performances in Carnegie Hall in New York City; in Severance Hall in Cleveland with the Cleveland Orchestra; and in Jordan Hall in Boston with the Boston Civic Orchestra. He toured the southeast United States sponsored by the United Negro College Fund (UNCF) and the New England Conservatory of Music. During this decade he also performed in Poland, Russia, Canada, France, Romania, and Germany.

Another career benchmark occurred in 1970 when he took a permanent appointment as a music professor at the University of Florida at Gainesville, thus becoming one of that school’s first African American faculty members. It was also at the university that he initially became acquainted with his wife, comparative literature professor Bernadette Cailler. By the 1980s he concertized only intermittently but he did leave behind recordings for posterity.

After a four-year battle with prostate cancer, Elwyn Albert Adams died on November 29, 1995 at the age of 62. His surviving sister, Armenta Adams, who was also a gifted classical pianist and outstanding concert performer, was serving as one of a handful of black professors at the Eastman School of Music in Rochester, New York.