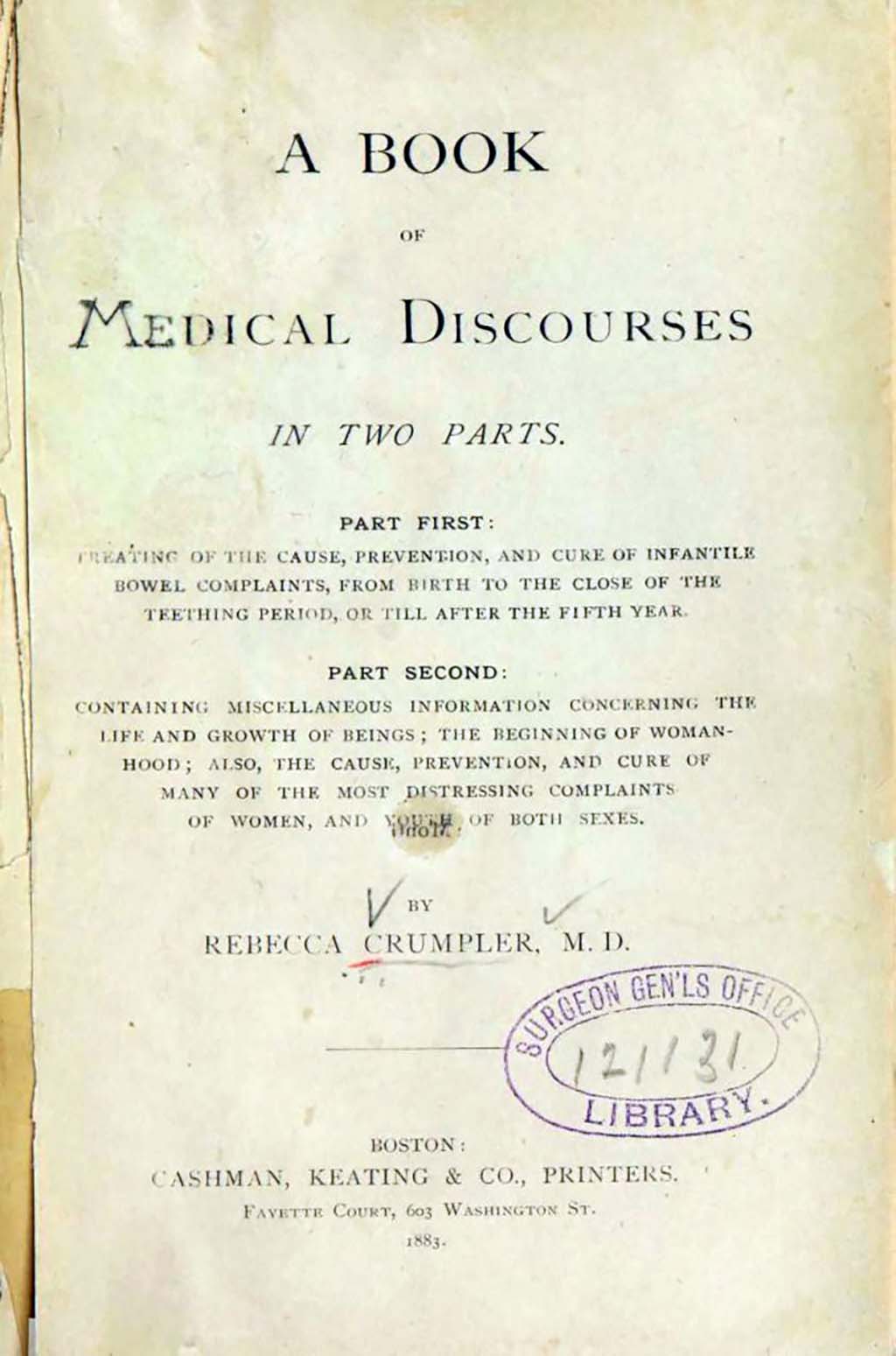 Dr. Rebecca Davis Lee Crumpler was the first African American woman doctor in the United States.  She completed medical school at the New England Female Medical College and received her M.D. in 1864.

Rebecca Davis Lee Crumpler was born free on February 8, 1831 to Absolum and Matilda (Webber) Davis in Christiana, Delaware.  She was raised by an aunt in Pennsylvania who was noted to have provided health care to her neighbors.  Crumpler attended the West Newton English and Classical School in West Newton, Massachusetts.  By 1852, twenty-one-year-old Davis was living in Charlestown, Massachusetts, where she worked as a nurse for eight years.  She enrolled in the New England Female Medical College in 1860.  Her acceptance at the college was highly unusual as most medical schools at that time it did not admit African Americans, and there were no black female doctors among the 54,000 physicians in the U.S.  At that time only 300 white women were doctors.  Despite its reluctance, the institution admitted Davis.  She won a tuition award from the Wade Scholarship Fund created by the Ohio abolitionist Benjamin Wade and graduated on March 1, 1864, four years after her admission to the institution.

While living in Charleston, Rebecca Davis married Wyatt Lee, a Virginia native and former slave.  Lee died of tuberculosis on April 18, 1863.  Two years later, on May 24, 1865, she married Arthur Crumpler in Saint John, New Brunswick, Canada.  Crumpler, a former slave who served in the Union Army, eventually worked at the West Newton English and Classical School.  The couple had one child, Lizzie Sinclair Crumpler, born in 1870.

Dr. Crumpler first practiced medicine in Boston and specialized in the care of women, children, and the poor.  She moved to Richmond, Virginia in 1865 to minister to freedpeople through the Freedmen’s Bureau.  Crumpler returned to Boston in 1869, where she practiced from her home on Beacon Hill and dispensed nutritional advice to poor women and children.  In 1883, she published a medical guide book, Book of Medical Discourses, which primarily gave advice for women on the health care of their families.

Dr. Rebecca Davis Lee Crumpler died on March 9, 1895, in the Hyde Park section of Boston and was buried in nearby Fairview Cemetery.  She was 64 at the time of her death.  In 1989, she was honored for her groundbreaking achievements when Saundra Maass-Robinson, M.D. and Patricia Whitley, M.D. founded the Rebecca Lee Society, an organization which supports and promotes black women physicians.