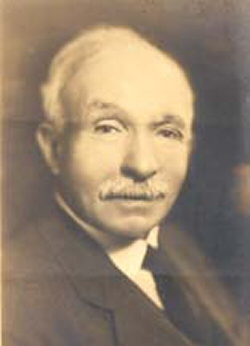 Charles Waddell Chesnutt was born the son of free black parents on June 20, 1858 in Cleveland, Ohio. His parents had recently moved to Cleveland from Fayetteville, North Carolina in response to the growing restrictions placed on free blacks in that slave state.

In 1872 Chesnutt was forced to end his formal education at the age of fourteen because he had to help support his parents.  However, the school’s principal invited him to stay at the school as a distinguished pupil-teacher and turn his modest salary over to his father.

In search of more lucrative employment, Chesnutt resigned his school-administrator post in 1883 and moved to New York City where he worked as a stenographer and journalist on Wall Street.  By 1887, Chesnutt returned to Cleveland and was admitted to the Ohio Bar. As a teacher, lawyer, businessman, and writer, Chesnutt was a prominent member of Cleveland’s African American elite.  By 1900, however, Chesnutt gave up his business and professional life to write and lecture full-time.

Chesnutt was one of the first black American fiction writers to receive serious critical attention and acclaim for portraying blacks realistically and sensitively. In 1899 he wrote his first major novel, The Conjure Woman.  Other books followed including The Wife of His Youth and Other Stories of the Color Line published also in 1899, as well as a biography of Frederick Douglass first released in that same year.  Another popular publication of Chesnutt was a novel entitled The House Behind the Cedars that he published in 1900.  Many of Chesnutt’s publications reflect a similar and distinct shunning of condescending characterizations of African Americans and challenging of the usual sympathetic portrayals of slavery.  Charles Waddell Chesnutt died in Cleveland in November, 1932.