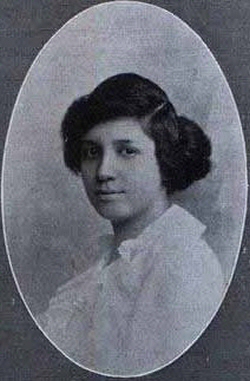 Martha Euphemia Lofton Haynes was the first African American woman to earn a Ph.D. in mathematics. Her dissertation, Determination of Sets of Independent Conditions Characterizing Certain Special Cases of Symmetric Correspondence was advised by Aubrey Landry, a professor at Catholic University in Washington, D.C.

Haynes was born to parents Dr. William Lofton and Mrs. Lavina Day Lofton in Washington, D.C. on September 11, 1890.  William Lofton was a prominent dentist and a financial supporter of black institutions and charities. Her mother was active in the Catholic Church. Later Haynes would also become active in the Catholic Church, earning a Papal medal, “Pro Ecclesia and Pontifex,” in 1959, for her service to the church and to her community.

Haynes started her educational journey at Miner Normal School, Washington D.C., where she graduated with distinction in 1909. She then attended Smith College in Massachusetts and earned her bachelor’s degree in mathematics with a minor in psychology in 1914. Later, she earned her master’s degree in education from the University of Chicago in 1930. Finally, at the age of 53, she earned her Ph.D. in mathematics from Catholic University of America in 1943.

In 1917, Martha Euphemia Lofton married Harold Appo Haynes who later became a school principal and then deputy superintendent of colored schools in Washington, D.C. The couple did not have any children. Harold Haynes died in 1978.

Haynes’ career consisted of teaching in the public school system of Washington, D.C. for 47 years, including Garrison and Garfield grade schools and high school mathematics at Armstrong High School. She was a professor of mathematics at Miner Teachers College (establishing their mathematics department in 1930) and the District of Colombia Teachers College. After retiring from the public school system, Haynes served as president of the Washington, D.C. Board of Education from 1960 to 1968. She was the first African American woman to hold this position. During her presidency, the machinery was set up for collective bargaining rights for teachers in Washington, D.C., a process that allows teachers to regulate their working conditions along with their employers.

Some of Haynes’ most notable efforts included advocating for the desegregation of public schools and her vocal and lasting opposition to the “track system” in District of Columbia schools which placed students—African Americans in particular—in either academic or vocational programs depending on their level of academic achievement in the early grades. Once in these trajectories, students did not have the ability to change their educational “track” even if their interests and achievements changed over time. Haynes was also elected fellow of the Association for the Advancement of Science in 1962.

Martha Euphemia Lofton Haynes died in Washington, D.C. on July 24, 1980. She was 90 years old. Her will indicated that Haynes left Catholic University $700,000. As a result the university established an endowed chair in the Department of Education, an annual colloquium, and a perpetual student loan fund all in her name.