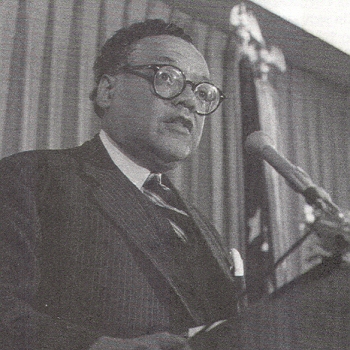 William Thaddeus Coleman, Jr., a prominent Republican lawyer and businessman, served as Secretary of Transportation under President Gerald Ford.  Born on July 7, 1920 to a middle class Philadelphia, Pennsylvania family, Coleman attended a segregated elementary school.  When he moved to Germantown High School he confronted racism as one of only seven blacks in the school.  Teachers thought his good grades would lead to a career as a chauffeur.  Coleman had other plans; he wanted to be a lawyer.

After clerking for the Supreme Court, in 1949 Coleman joined the first of what would be a series of high profile law firms.  While working in New York, he met Thurgood Marshall.  Over the next few years the two worked together arguing a series of cases to lay groundwork for an assault on school segregation.  Coleman coauthored the National Association for the Advancement of Colored People’s (NAACP) brief for Brown v. Board of Education and accompanied Marshall to oral arguments at the Supreme Court in 1954.  Coleman remained active in civil rights throughout his career.  He argued McLaughlin v. Florida (overturning prohibitions on interracial cohabitation) in 1964 and Bob Jones University v. U.S. (upholding the government’s power to revoke the tax-exempt status of discriminatory religious institutions) in 1983.

Coleman became a presidential adviser in 1959 when he accepted President Dwight Eisenhower’s invitation to serve on the President’s Commission on Employment Policy.  He later served on the Warren Commission which investigated the assassination of President John F. Kennedy.  He declined President Lyndon Johnson’s offer of an appellate judgeship, and became instead a U.S. delegate to the United Nations.  In 1975 Coleman accepted his first full-time Federal appointment, becoming only the second African American cabinet member, as Ford’s Secretary of Transportation.  Coleman ran the fourth largest Federal department.  True to Republican principles, he attempted to cut federal subsidies to transportation, and promoted government deregulation.

After leaving the cabinet, Coleman ran the Washington, D.C. office of the Los Angeles, California law firm O’Melveny and Meyers.  He continued to serve on the boards of major companies, including IBM, Chase Manhattan, and Washington Mutual.  Although a life-long Republican, Coleman publicly differed with the Reagan administration over its approach to civil rights.  In 1995 President Bill Clinton awarded William T. Coleman the Presidential Medal of Freedom, the highest honor the U.S. government gives to civilians.