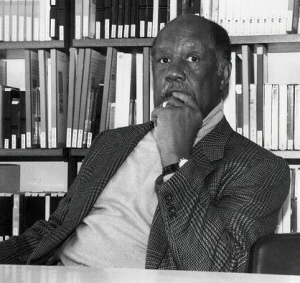 Ernest J. Gaines was born on January 15, 1933 on River Lake Plantation near Oscar, Louisiana, in Point Coupee Parish.  His parents, Manuel and Adrienne worked as sharecroppers on the same plantation their ancestors had labored as slaves. Ernest was the oldest of seven children Adrienne had with Manuel Gaines, who abandoned the family in 1941 when Ernest was eight years old.  Adrienne remarried and had five more children with her new husband, Raphael Norbert Colar, Sr.

In 1948, at the age of fifteen, Gaines moved from southern Louisiana’s bayou country to Vallejo, California to join his mother and stepfather, who had relocated to California after World War II in search of work.  In California, Gaines took advantage of educational opportunities he had been denied in Louisiana and graduated from high school in 1951.  After graduation from Vallejo Junior College in 1953, Gaines was drafted into the U.S. Army, where he spent the next two years serving in both the U.S. and Guam.

Upon his discharge from the Army, Gaines returned to California and continued his education at San Francisco State College, where he earned a bachelor’s degree in 1957.  During his studies at San Francisco State, Gaines had several short stories published in the college literary magazine, Transfer.  In 1958, Gaines won the Wallace Stegner Creative Writing Award and soon afterwards entered Stanford University’s graduate creative writing program.  After polishing his writing skills for a year at Stanford, Gaines withdrew from school and dedicated himself to writing full time.

Between 1960 and 1963, Gaines had a number of short stories published. His first novel, Catherine Carmier, was published in 1964.  His second novel, Of Love and Dust, appeared in 1967, followed by a collection of short stories entitled Bloodline in 1968.  Gaines received some critical acclaim for these works, but it was not until the publication of The Autobiography of Miss Jane Pittman in 1971 that Gaines received widespread praise for his talents.  This book, a fictional autobiography, based on historical events, was nominated for a Pulitzer Prize and made into a television movie which aired on CBS.  The film starred Cicely Tyson as Miss Jane Pittman and earned nine Emmy Awards in 1974.  During his career, Gaines had two more novels made into film.  A Gathering of Old Men was published in 1983 and adapted to film by CBS in 1987.  A Lesson Before Dying was published in 1993 and aired as an HBO movie in 1999.  Gaines received his second nomination for a Pulitzer Prize for A Lesson Before Dying, and the film version won the 1999 Emmy Award for Outstanding Made for Television Movie.

All of Gaines’s novels are set in Louisiana, where Gaines was also Writer-in-Residence at the University of Louisiana at Lafayette from 1981 to 2010.  His professional accolades include a “genius grant” from the John D. and Catherine T. MacArthur Foundation in 1993; the Governor’s Arts Awards Lifetime Achievement Award in Louisiana (2000); the National Humanities Medal (2000); the National Medal of Arts (2013); and a number of honorary doctorates. In 2008, the University of Louisiana at Lafayette established the Ernest J. Gaines Center to promote the study of the author’s life and work.

Gaines passed away on November 5, 2019, at his home in Oscar, Louisiana. He is survived by his wife, Dianne Saulney.