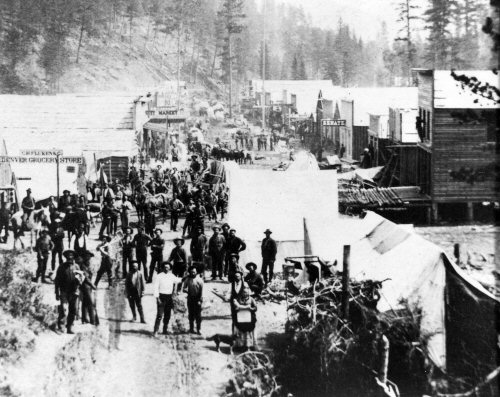 Sarah A. Campbell, one of the first non-Native women in the Black Hills of South Dakota, accompanied Colonel George Armstrong Custer’s 1874 Expedition there as a cook, prospected for gold and silver, and was co-founder of the Custer Park Mining Company.

Campbell was born on July 10, 1823, in Kentucky to an African American slave named Marianne. Although a will stipulated that Marianne and her children were to be manumitted upon her owner’s death, Marianne remained enslaved illegally until her own death in 1834. Six days later, 11-year-old Sally was sold to Henry Chouteau, cousin of the founder of Dakota’s Fort Pierre. Sally filed an “unlawful detainment” suit against Henry Chouteau the following year and with the aid of an attorney won her lawsuit and her freedom in 1837, receiving a single penny in damages.

While still enslaved, Campbell was rented out as a cook on steamboats serving the upper Missouri River fur trade. As a free woman, she continued to work on steamboats and married a fellow steamboat worker from Illinois. Their son St. Clair operated the ferry at Dakota’s Fort Randall before his death in 1885 at the age of 45.

In 1873 Campbell moved as a widow to Bismarck, Dakota Territory. Under the affectionate nickname of “Aunt Sally”, she claimed seven lots and operated a private club, took in laundry, and served as midwife there. A year later, during Custer’s Black Hills Expedition, she and 20 other Bismarck residents formed the Custer Park Mining Company and staked placer claims on French Creek, now part of Custer State Park.

When the Black Hills Gold Rush began in 1876, Campbell joined the second outfit from Bismarck to head for the region. She lived in Crook City and Galena, both mining towns on the western border of modern-day South Dakota, and continued to work as cook and midwife while she prospected. She searched for both gold and silver and filed five claims, although the Alice Lode silver mine in the Black Hills was the only one that proved valuable. Fifteen months before her death, she sold it for $500.

When the silver boom in Galena abruptly ended, Campbell moved to a ranch just to the south where she and an adopted son planned to run a wood camp for miners and railroad workers. Campbell died on April 10, 1888, at the age of 64 and is buried at the Vinegar Hill Cemetery in Galena, South Dakota.

Herbert Krause and Gary D. Olson, Prelude
to Glory: A newspaper accounting of Custer’s 1874 Expedition to the Black Hills