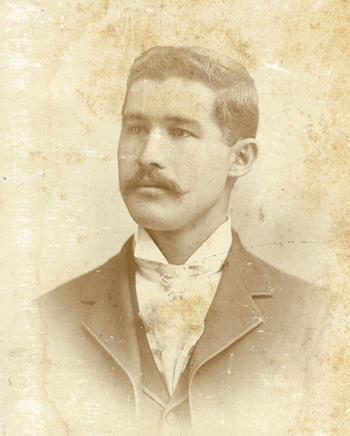 Alex Manly was editor of the Daily Record, a black newspaper from Wilmington, North Carolina at the time of the Wilmington Riot in 1898. Manly was born near Raleigh, North Carolina in 1866.  He was reportedly a descendent of Governor Charles Manly and Corrine Manly, a former slave in the governor’s household.  Alex Manly and his brothers were educated at Hampton Institute, and in 1895 he took over Wilmington’s leading black newspaper, the Daily Record with the help of his brother, Frank.

In Wilmington, Manly involved himself in the community, working as a deputy register of deeds and teaching Sunday school at the Chestnut Street Presbyterian Church.  In 1897 he expanded the flourishing Daily Record from a weekly to a daily paper.  With financial backing from white advertisers and broad local subscriptions, the paper acted as an important voice for Wilmington’s black community. He became engaged to Caroline Sadgwar, a graduate of Fisk University and daughter of prominent community member Frederick Sadgwar.

In an editorial published August 18, 1898, Manly challenged interracial sexual stereotypes, condemning white men for taking advantage of black women. His assertion that it was no worse for a white woman to be sexually involved with a black man than a black woman to be sexually involved with a white man infuriated conservative local Democrats, who were able to capitalize on white fears of interracial intimacy at the ballot box. White advertisers stopped running ads in the black paper, financially crippling the Daily Record.  In the face of growing white animosity, the owner of the 7th Street office building that housed the press terminated the lease and insisted Manly move the paper elsewhere. Groups of armed black men formed to protect Manly, who had received death threats, and faced the likelihood of attack by a violent white mob.

On November 8, 1989, despite a heavy black turnout at the ballot box, Democrats carried Wilmington.  The next day Wilmington Democrats gathered to read “The White Declaration of Independence,” calling for the resignation of the city’s black mayor and chief of police as well as demanding the Daily Record cease publication and Alex Manly leave town within 24 hours on pain of death.

As racial tensions escalated into a violent riot over the next few days, Manly and his brother, Frank, quietly slipped out of town. Both light skinned, they were able to pass as white and get out of the city ahead of the ensuing riot.

After fleeing Wilmington, Manly stayed in the home of North Carolina Congressman George White, the only African American representative remaining in Congress. In 1900 he married Caroline Sadgwar in the home of Congressman White.  The couple moved to Philadelphia and had a son, Milo.  Alex Manly became involved in the Afro-American Newspaper Council and helped found the Armstrong Association, a precursor to the Urban League. He died in Philadelphia in 1944.