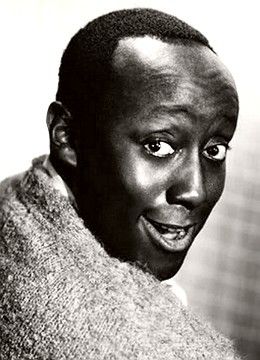 Godfrey MacArthur Cambridge, actor and comedian, was born in New York City in 1933.  His father Alexander Cambridge and his mother Sarah Cambridge were born in British Guiana.  They moved to Sydney, Nova Scotia, Canada and then Harlem, New York.  Before emigrating, his father worked as a bookkeeper and his mother worked as a stenographer.  In New York, they worked as a day laborer and garment worker, respectively.  Cambridge’s parents disapproved of the New York City school system, so as a child, Cambridge lived with his grandparents in Sydney where his grandfather worked in a coal mine and ran a grocery store. When Cambridge was 13, he moved back to New York and attended Flushing High School.

In 1949, Cambridge won a scholarship to Hofstra University.  Three year later, he dropped out of school to become an actor.  His 1956 performance in the Off-Broadway show Take a Giant Step opened the door to several television and Broadway roles. Cambridge also started performing stand-up in local comedy clubs.  Nonetheless during this time he worked a cab driver, bead-sorter, ambulance driver, gardener, judo instructor, and clerk for the New York City Housing Authority.

In 1961, Cambridge played Diouf in an Off-Broadway production of Jean Genet’s The Blacks and won an Obie award for his performance.  The following year Cambridge was nominated for a Tony Award for his role in Ossie Davis’s Purlie Victorious in 1962.  The same year, he married actress Barbara Ann Teer, who he divorced in 1965.

After performing in the film adaptation of Purlie Victorious entitled Gone Are the Days! (1963), Cambridge joined the Greenwich Village integrated comedy revue, Living Premise, and continued performing comedy gigs on the college circuit.  He earned national fame for his comedy after he appeared on The Jack Paar Show in 1964.  That appearance led to performances in top-tier comedy clubs and earned him a contract with Epic records.  Cambridge recorded four comedy albums: Ready or No, Here’s Godfrey Cambridge, Them Cotton Pickin Days Is Over, Godfrey Cambridge Toys with the World, and The Godfrey Cambridge Show between 1960 and 1965.

In the 1960s, Cambridge took up photography and displayed his photographs in a New York City exhibit. He also wrote Put-Ons and Put-Downs (1967).  Godfrey Cambridge died of a heart attack in Hollywood on November 29, 1976.  He was 43.