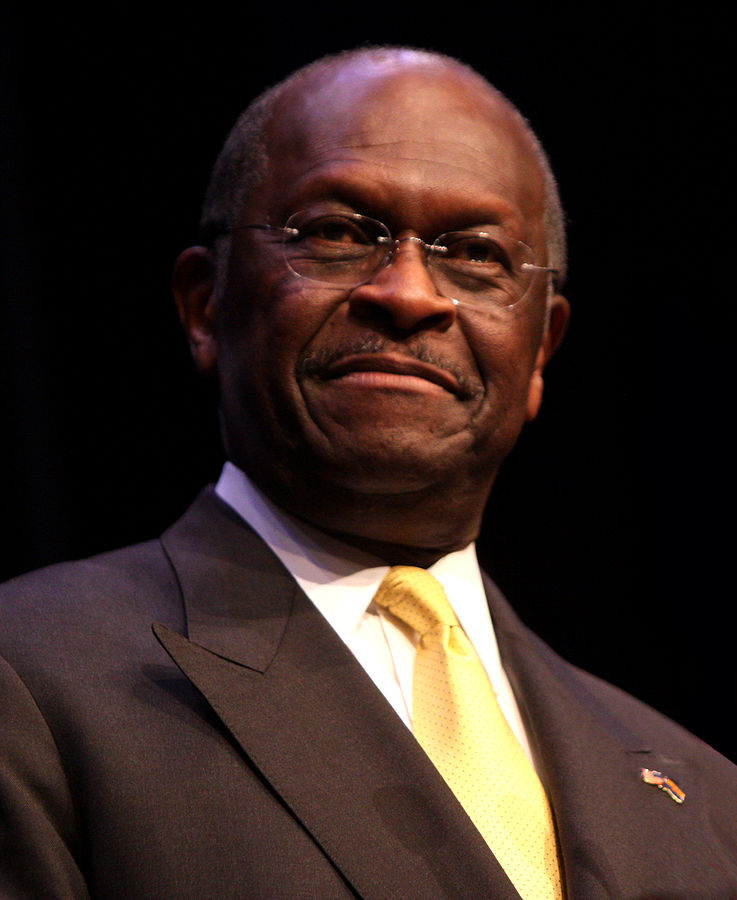 Herman Cain, Republican Party activist and 2012 Presidential candidate was also a newspaper columnist, popular radio talk show host in Atlanta, and former chairman and CEO of Godfather’s Pizza, a Pillsbury subsidiary.  Cain was born on December 13, 1945, in Memphis, Tennessee, the son of Luther and Lenora Cain.

Cain graduated from Morehouse College in Atlanta, Georgia in 1967, with a Bachelor of Science in mathematics. He received a master’s degree in computer science from Purdue University, in 1971, while working as a mathematician for the U.S. Navy.

In 1977, Cain joined the Pillsbury Company in Minneapolis. Within five years he had risen to the position of Vice-President of Corporate Systems and Services, making him, at 32, the youngest vice president in the history of the corporation. In 1982, he moved to the Burger King subsidiary of Pillsbury, where he gained a reputation for turning around struggling companies. Four years later Cain led a group of investors in purchasing faltering Godfather’s Pizza from Pillsbury.  Rather than investing more money in marketing as traditional business models advised, he focused on improving service to customers. His strategy worked, and Godfather’s became a success.  Cain stepped down as Godfather’s CEO in 1996.

Cain became president of the National Restaurant Association (NRA) in 1994, where he served for a year.  The NRA is the food service industry’s leading trade organization. After serving as deputy chairman of the Federal Reserve Bank of Kansas City from 1992 to 1994, he was elected chair and served in that role from 1995 to 1996.

A charismatic speaker, Cain became active in politics in 1994, when he traveled around the country campaigning against President Bill Clinton’s health plan, contending that it would hurt small businesses. Cain entered the political arena in 2000 when he launched an unsuccessful presidential bid.  In 2004, he ran for U.S. Senate in Georgia, but lost out to Congressman Johnny Isakson in the Republican primary. In 2000 he launched The Herman Cain Show, a conservative talk show in Atlanta that aired until 2011.

Cain’s campaign paralleled that of most conservative political activists.  He advocated a strong military, lower taxes, and reduced government spending, He particularly wanted a reduction in the federal corporate income tax, the termination of the 2010 health care legislation, and a return to the gold standard.

Herman Cain was married to Gloria Etchison Cain.  The couple has two grown children, Melanie and Vincent.  The family lived in the suburbs of Atlanta, Georgia.  In 2006, Cain was diagnosed with Stage IV cancer in both his colon and his liver. Cain underwent surgery and chemotherapy following the diagnosis and later reported that he was cancer-free.