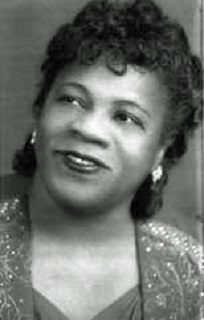 Mary Lucinda Cardwell Dawson was a leader in the campaign to promote African American participation in and appreciation of opera.  Cardwell was born in 1896 in Madison, North Carolina, the second of six children.  In the early 1900s, her family became part of the African American migration from the rural South to the urban North when they settled in Homestead, Pennsylvania, an industrial suburb of Pittsburgh.

As with many young African American musicians, Mary Cardwell began singing in her family’s church.  She graduated with degrees in piano and voice from the New England Conservatory of Music in 1925 at the age of 31.  At the time she was the only African American in her class.  After further studies in Chicago and New York, she married Walter Dawson, a Master Electrician, in 1927, and returned to Pittsburgh.

For the next 14 years Dawson trained hundreds of young, often impoverished African Americans to sing the operas.  Her students included school children, laborers, and domestics who often bartered services for their lessons.  She directed a 500-voice ensemble which won national awards in 1935 and 1937.  In 1939, her students performed at the New York World’s Fair.

In 1940 Dawson became president of the National Organization of Negro Musicians and the following year founded the National Negro Opera Company (NNOC) in Pittsburgh.  One of the organization’s first victories involved Lillian Evanti, an already established soprano in Europe who was repeatedly rejected by all-white opera companies in the United States.  Evanti finally launched her U.S. career as Violetta, in the 1943 NNOC production of “La Traviata.” Evanti performed on a floating stage in Washington, D.C.  After her performance Evanti would eventually join the New York Metropolitan Opera.

Her legacy continued in her students.  Robert McFerrin was the first African American to perform regularly with the Metropolitan Opera.  His sons Bobby, Ahmad Jamal, and Napoleon Reed continue in the music industry in jazz and opera.  Thom Douglas, a Carnegie Hall professor, created the Neighborhood Opera Company in Pittsburgh.  Robert Pruitt, who taught at Pittsburgh’s High School for the Creative and Performing Arts, was also one of the first black performers for the Pittsburgh Opera.  Demareus Cooper and Neal Huguley were performers with the Metropolitan Opera.

Mary Cardwell Dawson suffered a fatal heart attack in 1962, and the National Negro Opera Company folded soon after.  The NNOC’s original home on Frankstown Avenue in Pittsburgh is currently being renovated as a historical site.