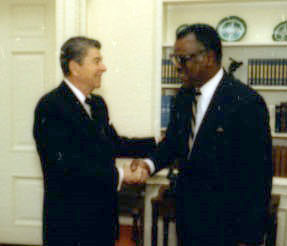 John Andrew Burroughs Jr. was an equal opportunity advocate and diplomat who was born in Washington, D.C. on July 31, 1936. He spent his youth in Washington, D.C. before moving to the Midwest to attend the University of Iowa in Iowa City, Iowa.  While there he played on the varsity football team, helping it win two conference championships and two Rose Bowl games. He graduated with his Bachelor’s Degree in 1959. After graduation, Burroughs returned to Washington, D.C., where he became a social sciences teacher in the city’s public school system.

In 1960 Burroughs left teaching to become an employee in the U.S. Department of State. His first job was as an employee in the passport examiner’s office from 1960 to 1963. In 1963 he was promoted to Assistant Chief of Special Services Branch of the Passport Office, a post he held until 1964.

Burroughs then served briefly in the State Department’s Bureau of Economics and Business Affairs from 1964 to 1966.  From 1966 onward he would hold a succession of equal opportunity posts beginning with his position as the Employee Relations Specialist in the Office of Civilian Manpower Management in the Department of the Navy (1966-1970).  From 1970 to 1977 he would be the Special Assistant for equal opportunity to the Assistant Secretary of Navy. During this time he also traveled across the world with the Secretary of the Navy and the Assistant Secretary of Defense promoting opportunities for women and people of color.  During this period he was also awarded a fellowship to attend the Stanford University (California) Executive Program to enhance his managerial skills.

Burroughs returned to the State Department in 1977 and served for the next three years a Deputy Assistant Secretary for Equal Employment Opportunity. He held a similar post in the Office of the Director General of the Foreign Services (1980-1981) where he worked with his colleagues on efforts to increase the number of people of color and women in the U.S. Foreign Service. His efforts to strengthen the U.S. Foreign Service were recognized through a Superior Service Award in 1980.

In 1981 President Ronald Reagan appointed Burroughs as U.S. Ambassador to Malawi, a post he held until 1984.  In Malawi, one of his primary roles as leader of the U.S. Mission was to monitor human rights issues, as refugees from neighboring civil war-torn Mozambique flooded into this small land-locked nation.

Upon his return to the U.S. in 1984 Ambassador Burroughs served as a Senior Fellow at the Joint Center for Political Studies (1984-1985) where some of his writing focused on apartheid South Africa. Following that work, he was sent to South Africa as the United States’ first black Counsel General at the Consulate in Cape Town, South Africa (1985-1988).  Burroughs represented U.S. interests in the city that was then a center of anti-apartheid activism.

Following his work in South Africa, President Reagan sent Ambassador Burroughs to Uganda where he served from 1988 to 1991. In Uganda, Ambassador Burroughs and his Embassy staff spent significant time mediating relationships between Uganda and its neighbor Rwanda in the years leading to the Rwandan Civil War and genocide by the Hutu majority against the Tutsi minority.

After his ambassadorial tour in Uganda, Ambassador Burroughs returned to the United States where he retired in 1994.  Ambassador John Andrew Burroughs Jr. passed away on September 11, 2014 in Washington, D.C. He was survived by his wife, Audrey.