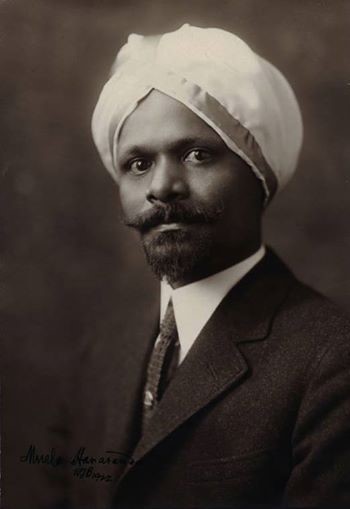 Mystic cult leader, intellectual, author, and war survivor Robert T. Browne was born in a shack near LaGrange, Texas, on July 16, 1882. He was believed to be the son of illiterate former slaves who likely attended a black Methodist church in the vicinity. An exceptional student, when Browne graduated in 1903 from Samuel Huston College in nearby Austin, he was immediately hired there as an assistant teacher. A year later he married Mylie De Pre Adams who presented him a son, Robert Jr., in 1906. Having passed the federal civil service examination, by 1910 Browne began working as a clerk at the U.S. Army Quartermaster Depot in San Antonio, Texas.

A widower by 1911, Browne moved to New York City, New York and resided in Harlem, working as a records clerk in the Quartermaster Corps, U.S. War Department. Away from work, Browne was quite active in the Methodist Church, YMCA, and the Negro Civic League of Greater New York. A serious bibliophile, in October 1914 he co-founded the Negro Library Association which promoted literacy via exhibits of books, manuscripts, and photographs. Browne also enrolled in experimental chemistry and literature classes at the City College of New York. He was an associate of the scholar Arthur Schomburg and historian Carter G. Woodson, and assisted them in advancing the mission of the American Negro Academy.

In 1919 Browne released The Mystery of Space (E. P. Dutton & Co.), a tour de force synthesis of mathematics, hyperspace, Eastern religious philosophy, theosophy, and mysticism.  The Mystery of Space was unlike anything published prior to that date by an African American author. Fearing it would be promptly rejected by editors if they knew its author was black, Browne carefully concealed his race when he submitted the manuscript. Also, unaware of his race were the highly respected critics of the book at the New York Times, London Mercury, New York’s Weekly Review, and the Springfield Republican, who among others, heaped praise on his magnum opus.

In 1925 Browne published the novel Cabriba: Garden of the Gods, a love story set in the Orient, tinged with mystery and occultism. Browne was a staunch supporter of black nationalist Marcus Garvey, contributing to his organization’s newspaper, The Negro World. Apparently to avoid racial discrimination and stereotyping, he relocated from Harlem to Brooklyn, began wearing a turban, pretended to be a foreigner, and renamed himself Mulla Hanaranda. Browne, along with the Swedish engineer-educator Arvid Reuterdahl, co-founded the occult organization Academy of Nations (AON) with its unique initiation rites and symbols.

In 1933 Browne’s government job as a purchasing agent transferred to the Philippines, then an American possession, where he worked uneventfully until the Japanese invaded in 1941. Trapped, he and 3,000 American and British nationals were forced to endure life in the horrid Santo Tomas internment camp. Browne survived the camp and in 1947 at the age of 65, Browne married the former Cecilia Weiss who had attended his lectures on oriental philosophy at the internment camp, and adopted her stepdaughter, Jyotisha. He continued to distill his eclectic, esoteric philosophy in the book The Pantelicon (1947) and attracted a devoted international following of spiritual knowledge seekers who regarded him as their ascended master. Browne died in New York City in October 1978 at the age of 96.