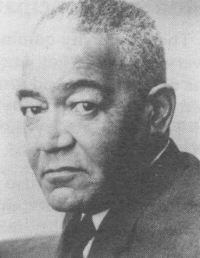 Bond was born on November 8, 1904 in Nashville, Tennessee, and knew the South well. In the wake of Brown v. Board of Education in 1954, anti-integrationists embarked on a program of massive resistance to orders to desegregate the South. In response to the efforts to claim an I.Q. gap between racial groups, Bond issued a number of stinging critiques of the racial claims about the intelligence of blacks. His most well known essay on the subject is “Racially Stuffed Shirts and Other Enemies of Mankind”: Horace Mann Bond’s parody of Segregationist Psychology in the 1950s.

It is noteworthy that the papers of Horace Mann Bond have been archived at the University of Massachusetts at Amherst. Much of his research emphasized the social, economic, and geographic factors influencing academic achievement as well as demonstrating that Bond was at the forefront of not only black education but also the movement for civil rights.