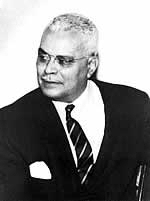 (William) Allison Davis graduated from Williams College with a B.A. degree in 1924, an M.A. from Harvard University in 1925 and a second degree in 1932. In 1942, he attained a Ph.D. from the University of Chicago where he became the first John Dewey Distinguished Service Professor of Education. He was the first black professor to receive tenure in Chicago but had been hired only after Julius Rosenwald offered to cover his salary. He taught there for more than forty years. From 1935 to 1939, he had taught Social Anthropology at Dillard University and for the next three years, held the dual positions as a staff person at the Center for Child Development and head of the department of education at Atlanta University. One of his ten books, Deep South: a Social Anthropological Study of Caste and Class served as reference material in the Supreme Court decision of Brown v. Board of Education of Topeka in 1954.

Davis was born in Washington, D.C. to a relatively prosperous family. As a social anthropologist and psychologist, he pursued research on a wide range of problems in learning and personality: studies of relationships between academic performance and child development, attitudes and motivations of children from different social groups, and patterns of adolescent and young adult achievement. He was the first in education from any race to become a fellow in the American Academy of Arts and Sciences, and one of the first to challenge the accuracy of the I.Q. tests for measuring accurately the educational potential of children from low-income families.

In 1968, Davis received an appointment on the White House Task Force for the Gifted. His many years of teaching included assignments at Dillard, Hampton, Harvard, and Yale with visiting posts at Columbia, Smith, and the University of Michigan. In his honor, the U.S. Postal service created a postage stamp bearing his likeness.