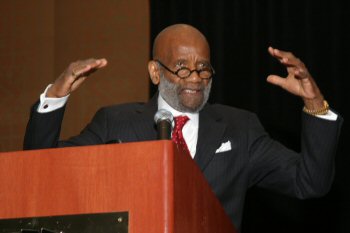 Lerone Bennett Jr., historian of African America, has authored articles, poems, short stories, and over nine books on African American history.  Bennett was born in Clarksdale, Mississippi the son of Lerone Bennett Sr. and Alma Reed. He and his family moved to Jackson, Mississippi, where he attended public schools. Bennett graduated from Morehouse College in Atlanta with a Bachelor of Arts degree in 1949. The same year Bennett enrolled in Atlanta University for graduate studies. He also became a newspaper journalist for the Atlanta Daily World.  Bennett moved to Chicago in 1952 to become city editor for JET magazine, founded by John H. Johnson.

In 1954 Lerone Bennett became an associate editor at Ebony, also owned by Johnson.  By 1958 when Bennett had become the senior editor at Ebony, Johnson encouraged Bennett to write books on African American history for a popular audience.

A series of history articles that Bennett had written over time for Ebony emerged in 1963 as his first book, Before the Mayflower: A History of Black America, 1619-1962. Bennett described the long history of black slavery and racial segregation while reminding his readers that African American roots in the American soil are deeper than those of the Puritans who arrived in 1620.

Bennett continued to document the historical forces shaping the black experience in America in subsequent books. His 1964 book, What Manner of Man, a study of Morehouse classmate, Martin Luther King Jr., was the first biography of the emerging civil rights leader.  In The Negro Mood, which also appeared in 1964, Bennett described the often ambiguous attitudes of African Americans toward the United States.  Bennett’s other books include Confrontation: Black and White (1965), Black Power U.S.A.: The Human Side of Reconstruction, 1867-1877 (1967); Pioneers in Protest (1968), The Challenge of Blackness (1972), and Wade in the Water: Great Moments in Black History (1979).  In 2000 he published Forced into Glory: Abraham Lincoln’s White Dream.

Lerone Bennett’s numerous honors include the prestigious Literature Award of the Academy of Arts and Letters, the Book of the Year Award from the Capital Press Club, and the Patron Saints Award from the Society of Midland Authors. Bennett has received honorary degrees from eight colleges and universities. He has served as advisor and consultant to national organizations and commissions, including the National Advisory Commission on Civil Disorders (the Kerner Commission) in 1967. Bennett was a member of Alpha Phi Alpha and Sigma Pi Phi fraternities. In 2001 Bennett was presented the Lamplighter Award for Corporate Leadership, whose work as an executive editor of Ebony magazine and as an historian has raised the level of consciousness of African Americans.