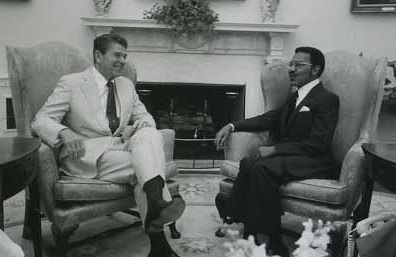 Former president and president emeritus of Howard University, Dr. James Edward Cheek is credited with major changes and improvements to one of the oldest historically African American institutions of higher education during his twenty-year tenure.

In 1941 the Cheek family moved to Greensboro, North Carolina, where he attended Washington Street Grammar School and Dudley High School and was an honor student despite suffering from severe cataracts. Cheek became a licensed Baptist minister at the age of thirteen and was ordained at seventeen by his pastor at Providence Baptist Church.

Cheek graduated from Immanuel Lutheran College High School in 1950 and enlisted in the United States Air Force, serving in Korea until his honorable discharge in 1951. On June 14, 1953, Cheek married Celestine Williams, and from this union, two children were born, James Jr. and Janet. Cheek graduated in 1955 with a Bachelor of Arts degree in Sociology and History from Shaw University.  Three years later, he received a Master of Divinity from Colgate Rochester Crozier Divinity School and a Doctorate in Classical Theology from Drew University in 1962. During his time at Colgate, he was a member of Alpha Phi Alpha Fraternity and Phi Beta Kappa Honor Society.   He was also a member of Sigma Pi Phi fraternity.

After taking a job as assistant professor of New Testament Theology at Virginia Union University in 1962, Cheek was named president of Shaw University in 1963. Chosen from among sixteen applicants, he was just thirty years old. Cheek was credited with enhancing the reputation of the university and was especially welcoming to early black power advocates.

In 1968 Cheek was appointed president of Howard University, making him the third African American to be named president of the HCBU. While at Howard, Cheek initially proved sympathetic to students who wanted the institution to be more closely tied to the radical politics of both the campus and the city.  Cheek also oversaw the expansion of Howard. Over the next twenty years, graduate and undergraduate programs expanded, student admissions increased from eight thousand to twelve thousand five hundred, and the number of faculty tripled, the budget grew from $700,000 to over $400 million, and federal grants increased.

The university acquired land, increased the number of buildings from eleven to eighteen, and built new campuses for a School of Divinity, School of Law, and the Howard University Hospital. The university also launched the commercial radio station, WHUR-FM, and the first African American owned PBS station, WHUT-TV.  While serving as president of the university, Cheek was named Washingtonian of the Year (1980) and awarded the Presidential Medal of Freedom by President Ronald Reagan (1983). Cheek resigned from Howard University in 1989, however when students protested the appointment of controversial GOP strategist Lee Atwater to the board of directors. Cheek was second longest serving president in Howard University’s history.

Cheek has served as a board member for numerous universities and colleges including Drew, Fisk and Howard Universities, the University of Miami, and Benedict College. He was awarded nineteen honorary degrees and hundreds of certificates for his service. Additionally, his presidential appointments included the National Advisory Counsel to the Peace Corps, the president’s board of advisers on Historically Black Colleges and Universities and the board of Foreign Scholarships. After his retirement from Howard University, Cheek served as the secretary of education in the U. S. Virgin Islands.

James Edward Cheek died on January 9, 2010, at the age of 77 in Greensboro, North Carolina, from complications of chronic pulmonary disease and coronary artery disease.