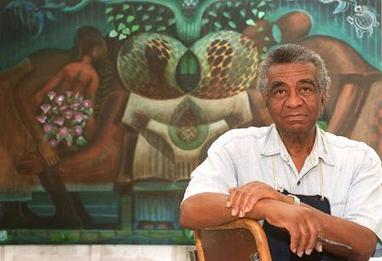 Twentieth century artist John Thomas Biggers was an educator, painter and muralist. His travels in Africa in the 1950s influenced the depiction of social and cultural themes in his work.

John Thomas Biggers was born in Gastonia, North Carolina in 1924. The youngest of seven children, Biggers enrolled in Hampton Institute where he initially studied plumbing. However, he found that his true love was art and soon changed his major.

Biggers trained with Viktor Lowenfeld at Hampton and received his first notoriety in 1943 when the 19-year-old student artist was featured in the exhibit Young Negro Art in New York’s Museum of Modern Art. That same year he was drafted into the U.S. Navy. In 1945 Biggers was committed to a Navy mental hospital in Pennsylvania for issues relating to anger and depression. Later that year he was dishonorably discharged.

Upon leaving the Navy, Biggers followed his mentor Lowenfeld to Pennsylvania State University where he developed his specialty working with murals. Biggers earned a master’s in art education in 1948 and a Ph.D. in 1954 from Pennsylvania State University. While still working on his dissertation, Biggers became an art instructor at the new Texas State College for Negroes (later Texas Southern University), becoming a founding member of its Art Department faculty. He continued to work at Texas Southern University until his retirement in 1983.

In 1957 Biggers was invited to participate in the United Nations Education Scientific and Cultural Organization (UNESCO) tour. On that tour he became one of the first African American artists to travel to newly independent Ghana. His experiences there shaped his subsequent work.

Biggers’ early work was infused with examples of social realism. He traveled to Africa several times after his UNESCO tour, and his work increasingly embodied the social and cultural themes he experienced while on the continent. In the 1960s, Biggers was one of the first black artists of the era to embrace an integration of African and African American influences in his work. By the 1980s and 1990s he began incorporating themes of birth and rebirth as he incorporated more feminine concentrations into his work.

John Biggers retired as a full time faculty member at Texas Southern in 1983 so that he could more fully devote himself to creating new pieces of art. He began working in collaboration with his brother James Biggers in the early 1990s. The two painted murals at Winston-Salem University in North Carolina and Hampton University (formerly Hampton Institute). In the late 1990s he created murals across his hometown of Houston, Texas.

Towards the end of his life, diabetes hindered Biggers’ ability to create works of art. He finally lost his battle with the disease and died in Houston on January 25, 2001.