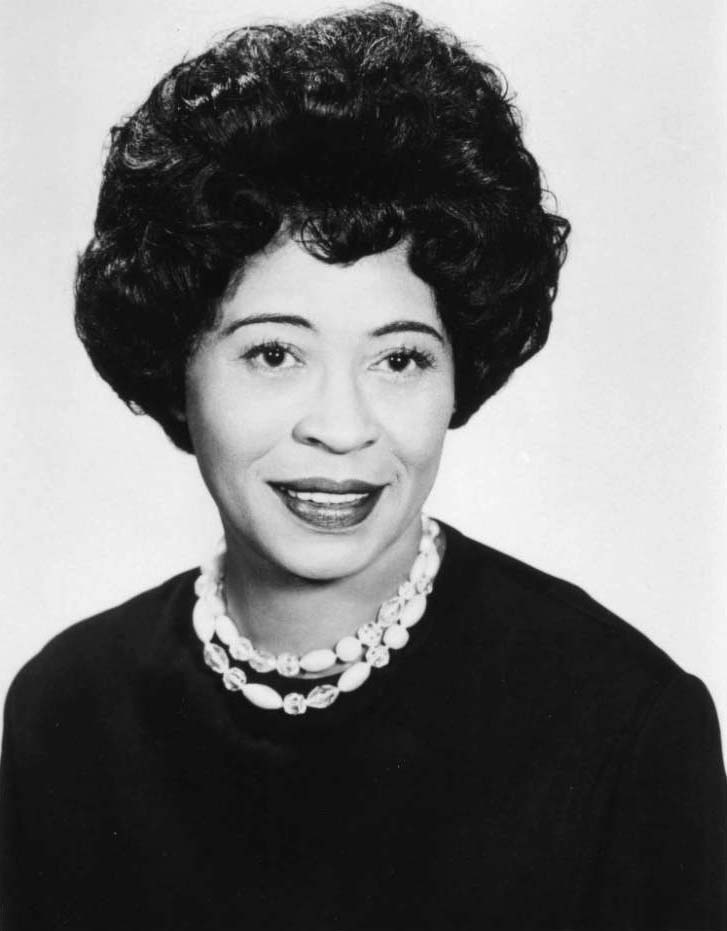 Newspaper publisher and civil rights activist Daisy Lee Gatson Bates was influential in the integration of the Little Rock Nine into Little Rock, Arkansas’s Central High School in 1957.  She was born Daisy Lee Gatson on November 11, 1914, in Huttih, Arkansas. Her mother, Millie Riley, was killed by three white men when she was an infant. Out of fear, her father, John Gatson, fled town and left his daughter in the care of friends Orlee and Susie Smith. Daisy Gatson attended the local segregated schools in her youth.

In 1928, when she was fifteen, she met Lucius Christopher Bates, a traveling salesman based in Memphis, Tennessee.  Together they moved to Little Rock, Arkansas in 1941 and were married on March 4, 1942. The couple established The Arkansas State Press, a weekly state-wide newspaper which advocated civil rights for black Arkansans. Bates also joined the Little Rock National Association for the Advancement of Colored People (NAACP) branch and was elected president of the Arkansas Conference of Branches in 1952. She remained active and a member of the National NAACP Board for the next twenty years.

Bates and her husband chronicled the 1954 Brown v Board of Education case which led to the lower court decision to integrate Little Rock Central High School. Her home, not far from Central High, became the organizing and strategy center for nine African American students, known as the Little Rock Nine, selected to desegregate the school in 1957. Bates walked into the schools daily with the children for an entire school year (1957-58). She received numerous death threats and she and her husband were forced to close the Arkansas State Press.

She was named Woman of the Year by the National Council of Negro Women in 1957. Along with the Little Rock Nine, Bates received the Spingarn Medal, the NAACP’s highest award, in 1958. Bates later wrote about her struggles in a memoir entitled The Long Shadow of Little Rock, published in 1962. The introduction was written by former First Lady, Eleanor Roosevelt.

During the year-long struggle in Little Rock, Bates also became the friend of Dr. Martin Luther King. He invited her to be the Women’s Day speaker at Dexter Avenue Baptist Church in Montgomery, Alabama in 1958.  She was subsequently elected to the executive committee of the Southern Christian Leadership Conference (SCLC). Bates spoke at the 1963 March on Washington for Jobs and Freedom.

In 1964, Bates moved to Washington D.C., to work for the Democratic National Committee She also served briefly in the administration of President Lyndon B. Johnson, working on anti-poverty programs. After suffering a stroke in 1965, she returned to Little Rock, Arkansas, but in 1968 she and her husband moved to the small African American community of Mitchellville in Desha County. Bates she established and became director of the Mitchellville Office of Equal Opportunity Self Help, a program responsible for a water and new sewer systems, a community center and paved streets.

Bates returned to Little Rock after the death of her husband in 1980 and revived the Arkansas State Press. In 1984, she was awarded an honorary Doctor of Laws degree from the University of Arkansas, Fayetteville and named an honorary member of Delta Sigma Theta Sorority. The university press republished her memoir in 1986, and it became the first reprinted edition to receive an American Book Award. In 1987, she sold newspaper but continued to act as a consultant for several years. Also in 1987, the Daisy Bates Elementary School was dedicated in Little Rock, and the state named the third Monday in February George Washington’s Birthday and Daisy Gatson Bates Day.  Bates carried the torch for the 1996 Olympics in Atlanta, Georgia.

Daisy Lee Gatson Bates died of a heart attack in Little Rock on November 4, 1999. She was the first African American to rest “In State” in the Arkansas State Capitol Building.  The Congressional Gold Medal was posthumously awarded to her by President Bill Clinton, and a documentary entitled “Daisy Bates: First Lady of Little Rock” aired on PBS in February of 2012.