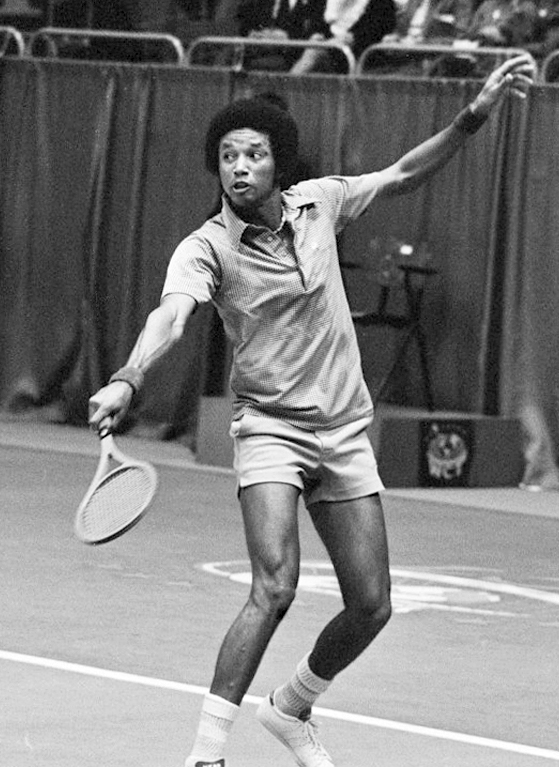 Arthur Robert Ashe Jr., legendary tennis player, human rights activist, and educator, was born on July 10, 1943, in Richmond, Virginia, to Arthur Sr. and Mattie Cunningham Ashe. At the age of four, he began playing tennis at Brook Field, a black-only park where his father worked as caretaker.

Before she died in 1950, Ashe’s mother taught him the importance of education. His father sponsored his early development in tennis. Ashe developed into a prodigy in the early 1950s under his lifelong coach Dr. Walter Johnson, who also trained professional tennis player and golfer Althea Gibson. In 1953, at the age of 10, Ashe won the American Tennis Association’s National Championship for boys 12 years and under. Determined to play in the all-white Junior United States Tennis Association (USTA), Ashe broke its racial barrier in 1957 when he competed in Maryland boys’ championships. This led to his regular inclusion in local summer USTA tournaments from 1957 to 1960.

In 1960, 17-year-old Ashe first gained national recognition as a high school student-athlete in Sports Illustrated. The following year, he entered the University of California at Los Angeles (UCLA) on a full scholarship. In Ashe’s sophomore year, he made the 1963 US Davis Cup team, a feat he repeated from 1964 to 1970 and again in 1975, 1976 and 1978. In 1965, Ashe was named the top-ranked amateur player in men’s tennis and, as team captain, guided the UCLA tennis team to the NCAA team championship, winning the individual and doubles titles.

From 1966 to 1969, Ashe was a commissioned officer in the army. He was assigned to the U.S. Military Academy at West Point, New York. In 1969, he first spoke out against South African apartheid which he saw as an extension of his fight against Jim Crow in the United States. From that date he became one of the most outspoken opponents of apartheid, constantly using his own success to challenge South Africa. In 1973, he forced concessions which led to his inclusion in the 1973 South African Open.

Ashe emerged as a leader among professional tennis players, co-founding the USTA National Junior Tennis League, which exposed inner-city youth to tennis, and the Association of Tennis Professionals (ATP). Ashe served as its president in 1974 following a 78-person boycott of Wimbledon.

In 1977, Ashe married photographer Jeanne Moutoussamy. Nine years later they had their only child, a daughter named Camera.

Heart complications stemming from a 1979 heart attack forced Ashe to retire from professional tennis in 1980. He compiled a career record of 818 wins and 260 losses. Ashe won 51 titles, including five Grand Slam titles, three as a singles player and two in doubles. In 1985, he was unanimously elected into the International Tennis Hall of Fame.

After his tennis career ended, Ashe became a noted journalist, humanitarian, and activist. In 1981, he became the first African American to be named national chairman of the American Heart Association. As a journalist he wrote for Tennis Magazine, Time Magazine and The Washington Post. Ashe was also a tennis commentator for ABC Sports and HBO Sports. He wrote eight books between 1967 and 1995 covering topics such as education, tennis, and African American achievement. He continued his fight against apartheid and in 1983 became the co-founder of Artists and Athletes Against Apartheid. Ashe was a member of Kappa Alpha Psi and Sigma Pi Phi fraternities.

In the early 1990s, Ashe became an ambassador for AIDS awareness. His concern about AIDS began with his HIV infection from a tainted blood transfusion during 1983 bypass surgery. By 1988 the infection had progressed from HIV into full-blown AIDS. The family publicly disclosed his condition on April 8, 1992, at a press conference. Nearly a year later, on February 6, 1993, Arthur Robert Ashe Jr. died from AIDS-related pneumonia at New York Hospital in New York City. His body lay in state at the governor’s mansion in his native Richmond, an unprecedented honor for an African American, and the first person to lie in state at the mansion since Confederate General Stonewall Jackson in 1863.

Posthumously, Ashe has been commemorated with many awards. Most notable are the Presidential Medal of Freedom (1993), a statute on Richmond’s Monument Avenue (1996), and, beginning in 1997, the US Open has been played in Arthur Ashe Stadium in Flushing Meadows Park, New York. Ashe was also honored with a U.S. postage stamp in 2005.