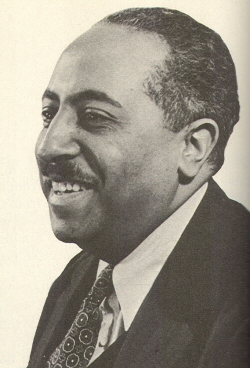 Hoping for a much better life outside the racially oppressive South and Alexandria, Louisiana where Arnaud Wendell Bontemps was born on October 13, 1902, the middle class Bontemps family moved to the Watts community just south of Los Angeles. They soon abandoned Catholicism and became devout Seventh Day Adventists. Bontemps’ mother was a schoolteacher and his father, a bricklayer, was determined to have the family assimilate into the dominant white culture. In 1923, Bontemps graduated from Pacific Union College, an Adventist school in California, and found work in the US Post Office. He next used his church connections to secure a teaching job at the Harlem Academy in New York City in 1924.

Bontemps’ arrival in the metropolis coincided with the height of the Harlem Renaissance and—inspired by the creative energy that surrounded him, and encouraged by his associates—over the next three years he wrote poetry that garnered the Alexander Pushkin Prize from Opportunity, the journal of the National Urban League) and the Poetry Prize from The Crisis, the publication of the National Association for the Advancement of Colored People (NAACP). Married in 1926 to a former student, Bontemps published his first novel, God Sends Sunday (1931), a racy tale of a jockey’s hectic life based on some of the true experiences of his Uncle Buddy, was followed by the award-winning “A Summer Tragedy” (1932), a broadly anthologized, unsentimental short story concerning elderly married Mississippi Delta sharecroppers who commit suicide. During this period he forged lasting friendships with Langston Hughes and Countee Cullen. Eventually, the Great Depression dispersed talented Harlemites like Bontemps who returned to the South to teach in the early 1930s at Oakwood Junior College, another Adventist school.

Considered a pioneer among African American historical fiction writers, Bontemps authored the best known of his novels, the critically-acclaimed Black Thunder (1936), which was based on the actual event of a slave revolt in Virginia led by Gabriel Prosser in 1800. Bontemps was largely responsible for bringing to prominence the genre of African American children’s literature with Popo and Fifina: Children of Haiti (1932) and subsequent works. In 1938 he penned his final novel, Drums at Dusk (1939). Disappointing sales and mixed reviews of the novel persuaded him to concentrate even more on literature for young readers until the 1960s, when he published Personals (1965), a collection of poetry, and wrote the introduction to a paperback edition of Black Thunder in 1968.

Upon earning a master’s degree in library science at the University of Chicago in 1943, Bontemps began 21 years of distinguished service at Fisk University where he was professor and head librarian. The Broadway musical St. Louis Woman, based on his first novel, premiered in 1946, and he collaborated with Langston Hughes to publish The Poetry of the Negro in 1949. In the decade of the 1950s Bontemps wrote biographies aimed at young people. He teamed up again with Hughes to co-edit The Book of Negro Folklore (1959). In the late 1960s he taught at the University of Illinois at Chicago Circle and briefly was curator of the James Weldon Johnson Collection at the Beinecke Library at Yale University.  Bontemps was a member of Sigma Pi Phi fraternity.

Bontemps’ final book was The Harlem Renaissance Remembered (1972). Among his honors and awards were two Julius Rosenwald Fellowships and two Guggenheim Fellowships; the Jane Addams Children’s Book Award in 1956 for The Story of the Negro (1948); and honorary doctorates from Morgan State University and Berea College. While a writer-in-residence at Fisk collecting his short fiction for publication, he died at his home in Nashville, Tennessee on June 4, 1973. He was 70 at the time of his death.